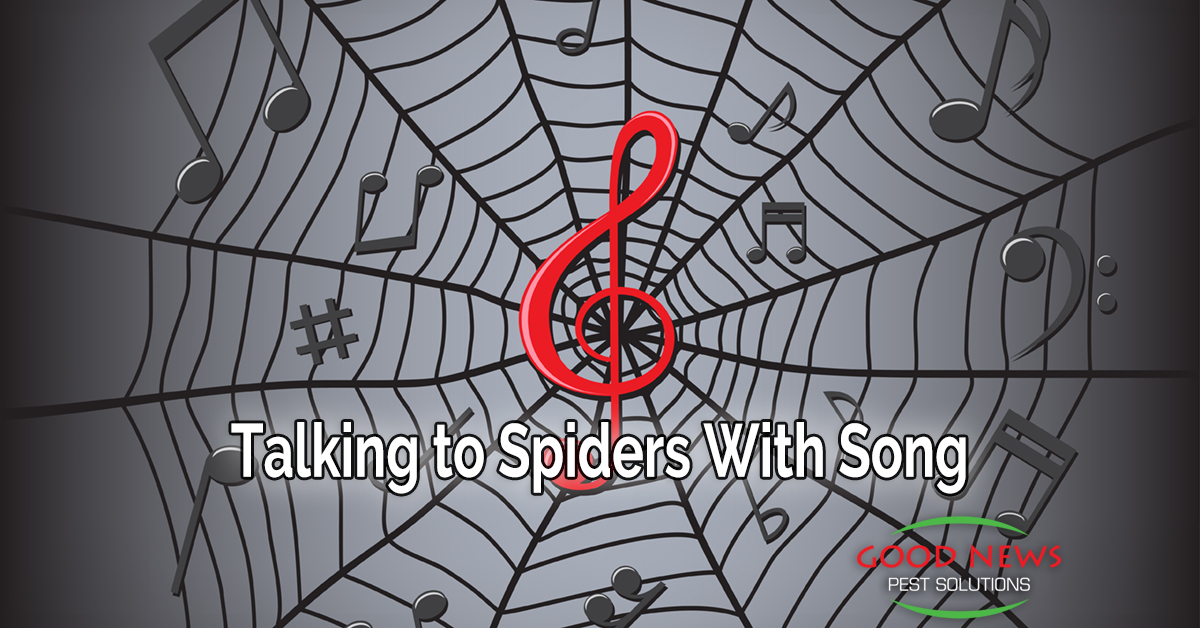 Talking to Spiders With Song

Most of the time when we encounter spider webs, it’s a less than entertaining experience. We’re trying to clean webs and cobwebs out of all of the corners of our home. Or maybe we’re accidentally stumbling into one while walking in the woods. Even if we know that spiders help with natural pest control and appreciate them for that, the webs are often times creepier than we’d like them do be, or actually are.

But as icky as they might seem, spider webs are far more detailed and complex than we realized. And every couple of years, scientists are discovering one more key thing about spiders and their webs that illuminates the diversity of God’s creation.

Music to Your… Legs?

One of the more recent discoveries that researchers have made is that spider webs are finely tuned musical instruments. Every strand of the web has its own tone. For years, we thought spiders just used their eyes or the sounds of a trapped insect thrashing around in their web to find them. They do ‘hear’ the sounds, but more precisely, the hairs on their body feel the unique vibrations. In fact, scientists have now isolated different combinations of vibrations that let the spider know if they have prey, a snapped strand or still under construction, or another spider looking to mate.

Back in 2018, engineers at MIT worked with an artist to translate spider webs tonal patterns into a new instrument, the Arachnodrone, and used it to perform several live concerts, titled “Spider’s Canvas.”

More recently, the same team built and used an algorithm to map the sonic properties of a web as it was being spun. What’s more, the deeper understanding of the sound qualities of the web construction had an interesting side effect.

While we typically picture a certain type of spider web – that of the orb spider – as a radial pattern of criss-crossed strands spiraling out from the center, kind of like spokes on a wheel, the majority of spider webs are far more complex. In fact, even though it’s difficult to see them with the naked eye, almost every spider web is fully three dimensional.

Those same guys at MIT used a laser to illuminate and then create a high definition 3D model of the spider webs. So, not only can they track the musicality of the web construction, they can look deeper. Spiders somehow manage to build three dimensional webs and often times do so with no real support structure, just casting their spider silk into the air. The engineers believe that studying the spider’s unique construction methods could lead to incredible breakthroughs in 3D printing.

To that end, they took the information gleaned from Spider’s Canvas, the laser detail and the sonic imprinting of the web and the web-building process and constructed a VR space. Now they can actually enter the spider’s environment. They can see and hear what they see and hear – and detect how changes like stretching or snapping a strand affect the entire web. And they can detect even more structure by “seeing it” with their ears, not just their eyes. Finally, a spider web you want to walk into!

The VR space has also helped them hone even tighter on the types and specificity of vibrations – the way the spiders feel them. And that understanding allows them to test little manipulations on the spiders – signaling through imitation an amorous visitor or a trapped insect. They hope the research will lead them into a system to possibly communicate with some spiders. Now wouldn’t that be crazy?

Until we can talk to the spiders like some sort of insect Dr. Doolittle, we’ll have to stick to traditional methods. Which means sometimes we love them and sometimes they creep us out. But we can also help the spiders stay out of our homes by eliminating the insects they love to devour. Our most popular solution – Go Green Perimeter Plus eliminates the most common household pests. And it covers your house all year round. For more details or to schedule your first green treatment, just give us a call!