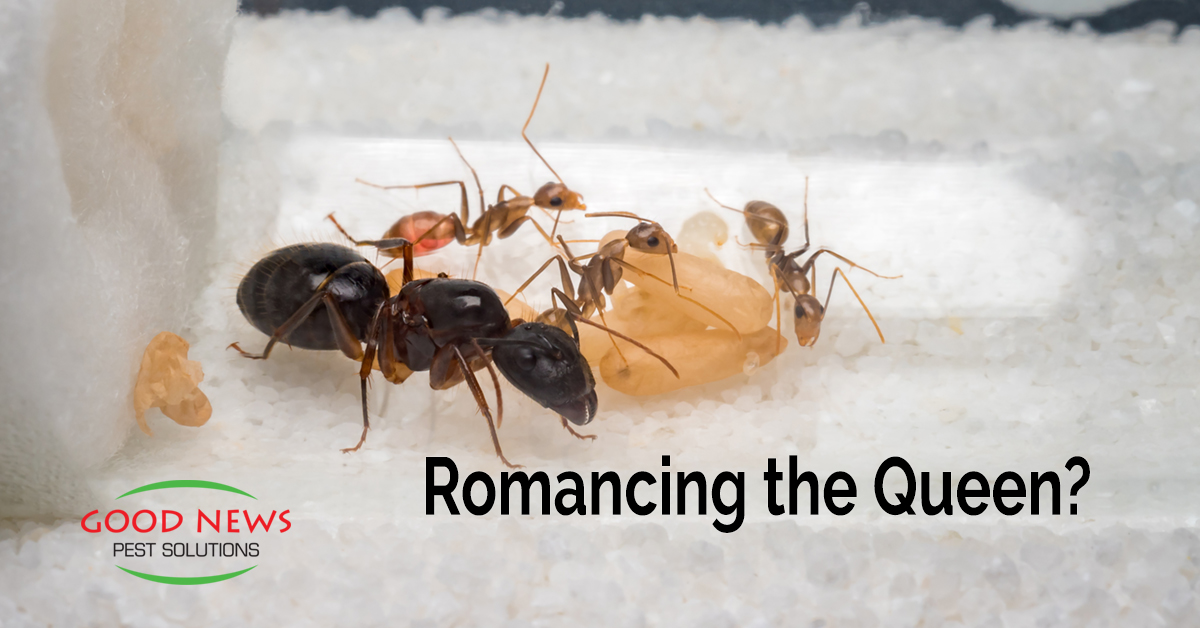 Close your eyes and picture it. It is one of those iconic scenes from old movies or Biblical illustrations. The queen, raised up on a litter, carried by 4 to 6 servants, and death is the penalty to any servant who lets her feet hit the ground.

You might think that such a scene never happens any more. When was the last time Queen Elizabeth or Queen Sonia of Norway was carted about on someone’s shoulders? Yeah, we don’t know either. But in the insect world, it can happen quite often.

Entomologists from Germany spent five years finding and tracking Cardiocondyla ant colonies in Southern France. They found 175 of these colonies and from 2014-2019 recorded more than 450 times where sterile worker ants carried their future queens, usually on their backs.

But the workers weren’t just taking the future royalty on some random voyage. Their pathways had a purpose – to protect and propagate their species. Most ant species simply send their male breeders to fly out. But in 2006, some of the same researchers found that the males of the species had lost their wings and were confined to the mating chamber.

They only mated with related females near the ant nest entrance and that prolonged inbreeding of the Cardiocondyla elegans had led to unhealthier ant colonies. Their queens lived shorter lives, more offspring died early, and there was an imbalance of sexes for the ones who survived.

So the ants adapted – since the males couldn’t come to the queen, they started bringing the queen to the males. And if that’s not amazing enough, the worker ants are very specific about which colonies get future queen deliveries.

The workers almost always travel in a straight line carting the queen. And they’ve been observed going as far as fifty feet. That may seem small, but these are 2-3mm ants, the equivalent of a mile for humans, travelling with up to twice their weight on their backs,

The worker ants also skip over other anthills closer to them. Somehow, no one knows how but God, the ants can tell which nests are most like them genetically. And to avoid the dangers of more inbreeding, they always carry the future queens to the nest that is least related to them. Every single time.

What’s more, after the workers drop off the young royal female, they return home. The queen mates and lays eggs. Then, when the newborn “native” queen emerges in the spring, the now older queen gets booted from the nest. Presumably she goes to launch a new colony.

The scientists say that among the species they’ve studied, none of the Cardiocondyla ants has the same mating pattern, colony structure or dispersion patterns. Each one is unique.

Some species of Cardiocondyla ants have been recorded in Florida – most notably C. nuda and C. minutior. But they are not an ant that typically invades our homes.

The same cannot be said of many other ant species. They love to infiltrate and camp out in our kitchens, pantries, and even walls. But there is good news. Our most popular solution – Go Green Perimeter Plus – takes care of ants as well as many other of the top creepy crawlies in Florida homes. And while we get rid of the ants, the treatments are safe for your whole family. To learn more, or schedule your first visit, just give us a call!