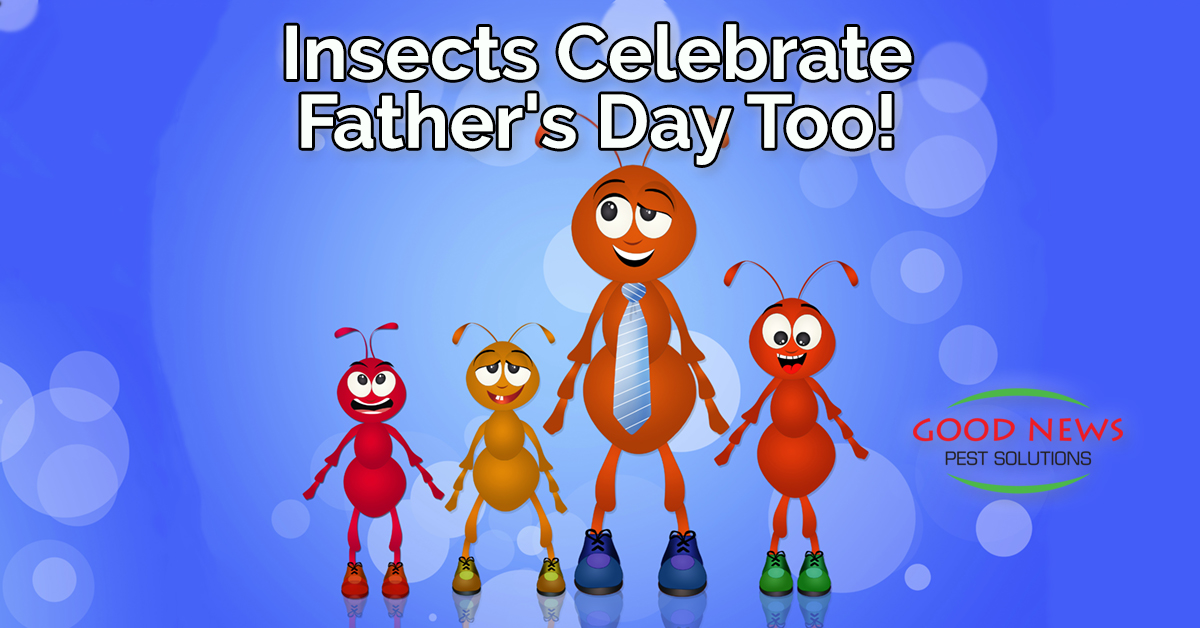 This Sunday we’ll mark the one hundred and eleventh annual celebration of Father’s Day. Thankfully, this year we can gather our families around us again, in person, as we celebrate fathers. In honor of this momentous occasion, we thought we’d take a look at some of the top dads in the insect world!

Of course, in order to become a father, first one has to attract a mate. Happily for those nervous fruit fly dads, in the insect world they don’t have to sit their kids down and talk about the birds and the bees. Okay, they probably do, but we’re betting it’s a more practical conversation.

The Drosophila buzzatii and Drosophila koepferae fruit flies “sing” a courtship song with wing vibrations that draw in willing females. Interestingly, both species have a type, so to speak. D. Buzzatii uses their musical skills to let the females know they’re around. D. Koepferae use their song to convey the qualities they seek in a mate – and those can vary based on the type of cactus they eat. Who knew?

Male fireflies have also learned to adapt to attract better mates. It might seem like fireflies are brighter in the woods than they are in the cities. But in fact, the opposite is true. Male fireflies can “turn up” the brightness on their glowing butts to be found easier by the females. While they can probably do this at any time, they do this primarily when they are doing their mating flashes.

We should note that not all fireflies use light to attract companions. Some use pheromones and other airborne smells to “get the girl.”

In many ways, the behavior of Lethrus apterus beetles resembles the protective approach of human men. After their babies are hatched, mama beetles care for their young. Meanwhile the papa beetle stands guard at the entrance to the tunnel leading to their brood.

It’s good that they’re there – other insects and predators will try and attack the entrance, hoping to get in. But in almost every instance, these battling dad beetles successfully defend their homes from intruders. Scientists say the protective instinct is a more powerful motivation than that of the attacker.

Some aspects of insect parentage are not that pleasant to think of. But it helps to picture our next protective parent bugs as doing their part in the circle of life. Nicrophorus vespilloides beetles co-parent – in an unusual way.

Mom and Dad beetles bury a small, usually mammalian, corpse in the ground. Then they settle in and make the decaying body their home sweet home. The parents feed their offspring from the corpse, with the dad beetle sometimes called upon to defend their growing brood. Entomologists say the male beetles who go through this process are often perceived by female beetles as more valuable and therefore more likely to breed again and again.

The granddaddy-o of the best dads in the insect world must go to none other than the Giant Water Bug. What we think of as traditional roles are reversed for Diplonychus rusticus. The mother bugs are on the prowl while the dads stay home to raise their “children.”

The male Giant Water Bug literally carries the eggs around on his back until they hatch. But that doesn’t mean he settles down. They will mate with other females until their backs are fully loaded. In fact, females find them more attractive now that they’ve proven they won’t drop them!

Clearly, having more caring dads is the preferred option for these crawling creatures.

Fathers are an important part of our lives, and we hope you’ll have the opportunity to tell your dads you love them. And, of course, thank them for all the things they’ve done for you over the years.

For all you dads out there, Happy Father’s Day from all of us at Good News Pest Solutions!