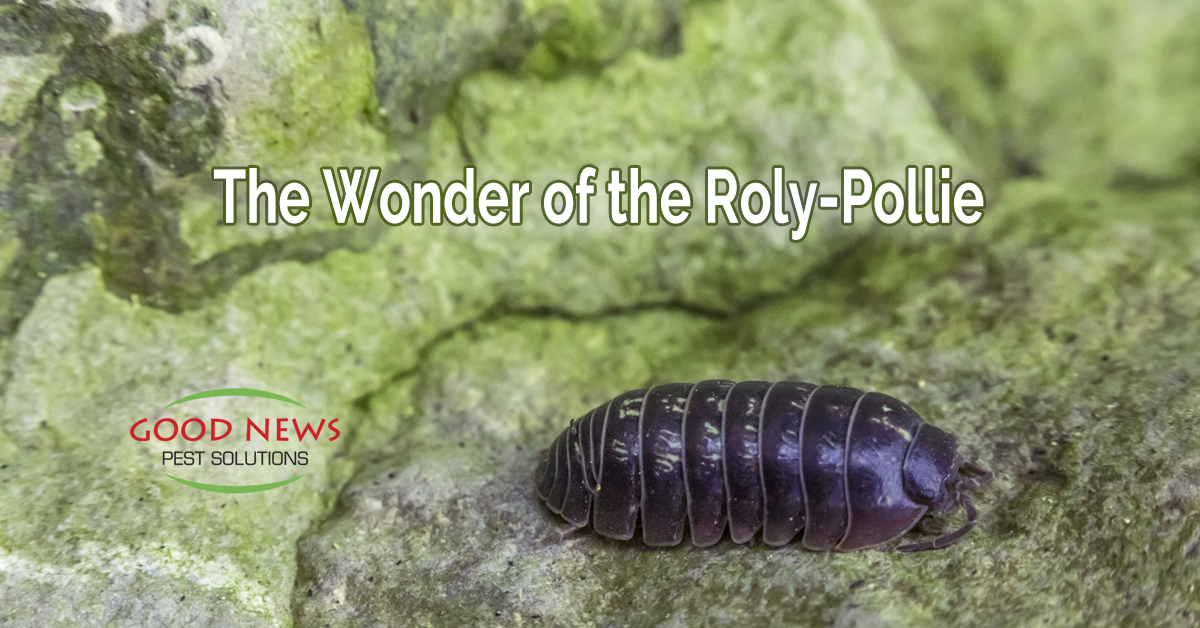 The Wonder of the Roly-Pollie

Now that the rainy season is in full swing, you might have noticed some new bugs encroaching on your house.  They look like dark, stunted caterpillars. And when you touch them, they have a tendency to roll up into a ball. Some of them do, anyway. But while these creatures are often referred to as “sow bugs” or “pill bugs” due to their appearance and behavior, they are not insects at all.

Armadillidium vulgare, or Roly-Pollies, are actually crustaceans – closely related to shrimp and lobsters – not beetles and flies.

They’re not pests, either. We often talk about how spiders & bats are God’s natural pest control agents. Well, Roly Pollies are God’s natural environmentalists. They remove pollutants such as carbon and toxic metals from the earth by devouring decaying plants. And they help renew the soil by adding nitrogen, phosphorous, and potassium to the earth when they’re finished eating.

We mentioned earlier how Roly-Pollies often roll up into a ball. But not all do. In fact, what we call pill bugs can be either pill bugs – who do roll up like a pill – or sow bugs, who are just a little too long and flat to pull it off.

Technically, they’re both species of woodlice, but that term comes with its own baggage. Hence the popularity of the pill bug name. They emigrated from Europe with our earliest pilgrim settlers and Spanish conquistadors and can be found in every state.

They’re nocturnal, so they may be less noticeable in Florida where we lack basements dark and dank enough for them to live in the house. But we do have them. They require warm humid surroundings, so they may venture into bathrooms or attics more open to the elements.

Again, they’re not harmful to your home. They don’t even bother most farmers, other than being a bit odd or even a little creepy to some folks. They prefer the outdoors where they can feed on dying plant leaves and other decaying foliage. So, don’t kill them if you find them indoors – just help them find their way out. Then check your home for floor level cracks and make sure your doorways are sealed.

If they really bother you, you can shift bushes and mulch away from your home, giving them less access to food. In fact, that’s a great way to help protect your home from actual insect invaders like cockroaches and ants.

If you’ve already got some annoying insects in your home, Good News Pest Solutions can help. Go Green Perimeter Plus eliminates and protects against the most common creepy crawlies in your home year round. We can even come in and escort the Roly-Pollies outside for you, if it helps. For more information, or to schedule your first family-friendly treatment, please give us a call!