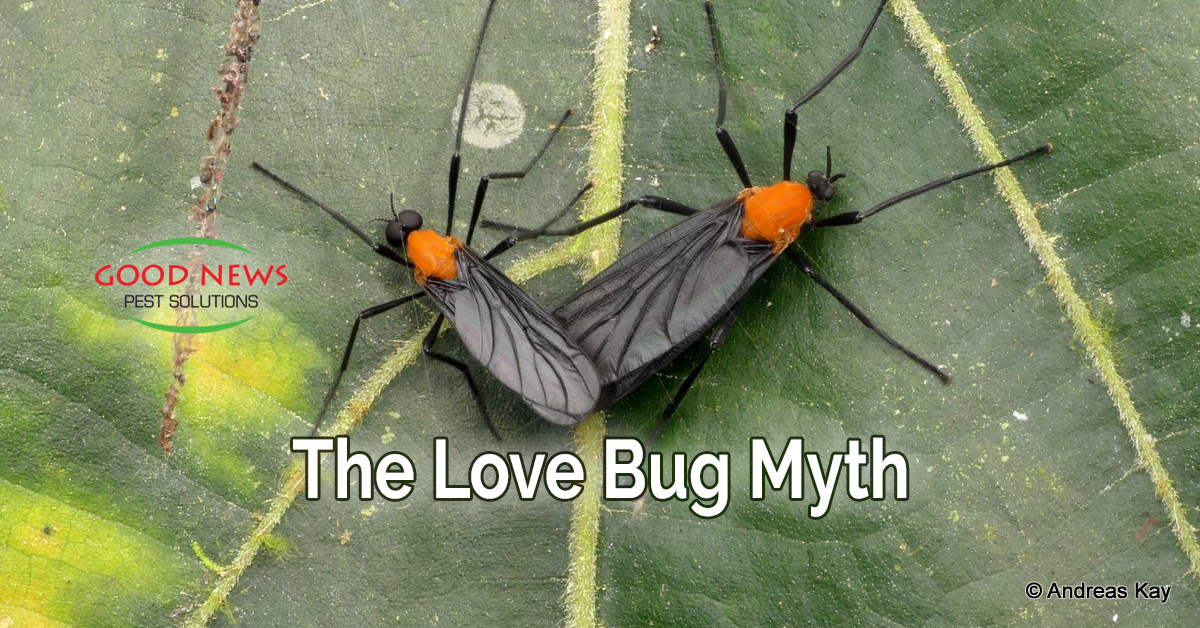 Most of the rest of the United States is preparing for the fall season to begin. But while they look forward to leaves changing color, we have our own fall tradition – love bug season!

God only knows why we suffer from two seasons of these highway terrors every year, but we do. Their first mating season hits in May, then subsides until we reach September again. So as we reload our windshield wiper fluid and arm ourselves with window squeegees, why don’t we look at some of the more… unusual beliefs about Florida’s second least favorite insect.

Because love bugs tend to swarm around the highways, many people actually believe they breathe carbon monoxide. Not sure where this one came from to be honest. Exhaust fumes attract them because the smell of our cars’ combustion is close enough to the pheromones that they use to attract mates.

They do come by their name honestly, though. The reason they’re so often paired off is because they are… making intimate connections. They breed and rapidly die – even if you don’t hit them with your car, because adult love bugs don’t eat anything. They just live to breed.

Their larvae, on the other hand, is useful for devouring decaying plant life. Even the most annoying of God’s creatures has a purpose.

Another popular belief about Plecia nearctica is that their blood will strip the paint off your car. This one is marginally true. For starters, their blood is not made of acid. While many birds do prefer to feed off other insects, it’s really our Florida heat that causes the problem.

Don’t get us wrong, you don’t want to leave a bunch of love bug remains all over your hood and grill. But it’s the warmth of the sun reacting to microorganisms as the love bugs decompose that can damage your paint. Repeated car washes can become an expensive solution.

Thankfully, most cars now are better able to survive – especially if you apply a good solid coat of wax. And before you pull out the hose or drive into the car wash, grab a dryer sheet. Use just a little water with the dryer sheet, and your car will look brand new.

Many blame widespread, weird rumors and often debunked pseudo-facts on social media or at least the Internet. Sadly, electronic advances have made it easier to send inaccuracies across the globe. But we had these problems long before the first computer emerged.

Since the 1970’s – and probably even earlier – people routinely blame the University of Florida for the love bug explosion. Despite being debunked thousands of times, some people still think love bugs were a science experiment gone awry.

Supposedly, in the 1950’s UF started working on a natural predator solution to mosquitoes. Some of these experimental insects escaped – or were set free, depending on the story being told. Regardless, they spread rapidly, science gone wrong. If only it were true, maybe we could use them to fight the Delta variant!

In all actuality, love bugs migrated to our coasts from Central America, coming up the Gulf of Mexico. And they didn’t just come to Florida – Texas, Louisiana, Mississippi, and Alabama also deal with them. In fact, Louisiana discovered them 30 years before we did.

The good news is, scientists did devise a natural way to combat mosquitoes – while allowing them to fulfil their God-given purpose. Our exclusive No Bite Zones Mosquito Protection Program turns biting momma mosquitoes and their offspring into vegans. Instead of lunching on you or your pets, mosquitoes will turn to plant life, thereby continuing their job of pollinating. It’s a win-win.

For more information, or to schedule a No Bite Zones delivery during your next home treatment, just give us a call!