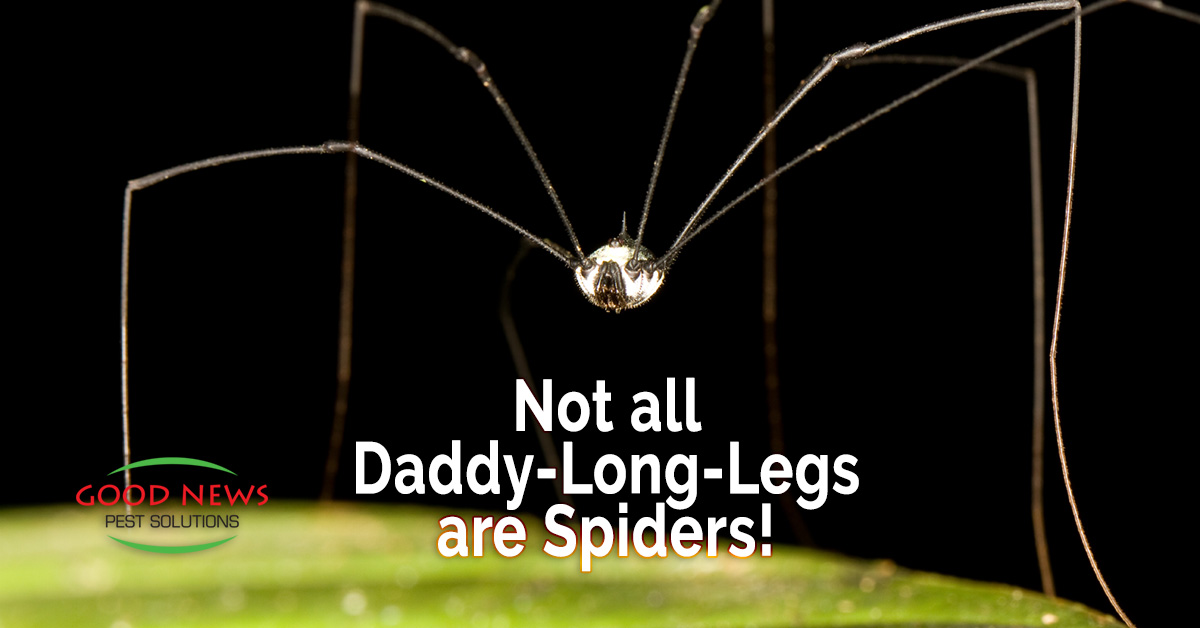 Not all Daddy-Long-Legs are Spiders!

As we reach the midpoint of October and our special series on spiders, we’d like to talk about some often seen creatures that are sometimes spiders… and sometimes not!

Among the more popular spiders that creep people out when they spot them indoors are Daddy Long Legs. But nine times out of ten what we’re seeing is not a spider.

Pholcus phalangioides or cellar spiders are pale, yellow brown spiders with a large grey patch on their backs. They have eight, nearly translucent legs, covered in fine grey hair. In fact, they are so nearly see-thru that if you look at them though a microscope, you can watch the blood moving in their bodies.

They prefer dark, dank areas, which is why we often spot them in basements and under rocks. The female is a little larger than the male and stores her eggs under her body. They do spin webs but sometimes will invade other spider’s webs – devouring them and borrowing their webs for hunting other small insects.

Tipulidae are a family of insects known as Crane Flies. Along with being mistaken for Daddy Long Legs spiders, they’re also wrongly believed to be giant mosquitoes. There are nearly 600 variations of the crane fly in the United States – except in Florida. We see more than 800 different varieties!

Crane flies are typically yellow, brown or grey, with long spindly legs – that they sometimes shed – and elongated wings. Their noses, or rostrums, in some species can be as long their head and bodies combined. Crane flies live between 10-15 days on average and eat nectar from plants – not our blood!

The third creature we call Daddy Long Legs are Metaphalangium albounilineatum – or Harvestmen. Like spiders, they are arachnids, but they’re more closely related to scorpions. They only have two eyes, not eight like spiders, and while spiders’ bodies are segmented, harvestmen have solid bodies.

Harvestmen don’t spin webs but do secrete a glue-like substance to capture prey. Contrary to urban legend, they aren’t venomous at all and don’t bite humans, regardless of the size of their fangs. But they do use their mouths to groom their long legs. They eat ants, aphids and beetles, as well as decaying plant matter. They live between two and seven years but have been around since before the dinosaurs!

Clearly there is nothing to be feared from any of these Daddy Long Legs – unless you’re a smaller insect. All the more reason to live and let live as they offer food for birds and fish and natural pest protection! If you’ve got other insects invading your home, we’re here to help. We utilize the safest, greenest, and most efficient pest control solutions available, all at an affordable price. For more details on our Go Green Perimeter solution, or to schedule your first treatment, just give us a call!