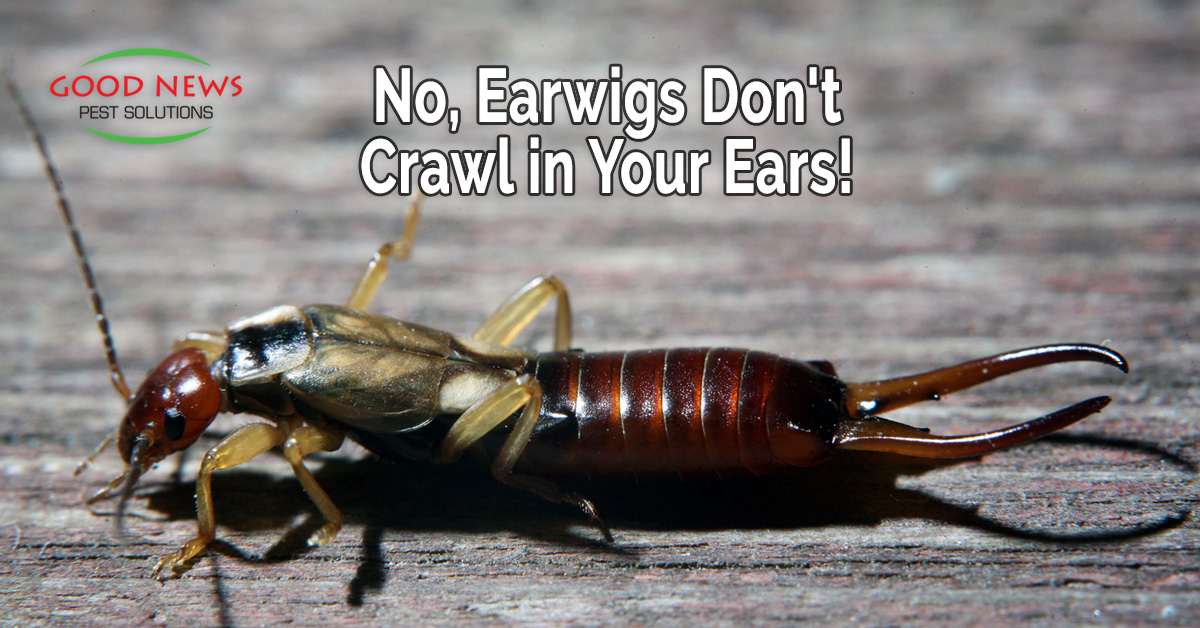 No, Earwigs Don't Crawl in Your Ears!

Most fans will tell you Star Trek II: The Wrath of Khan is easily the best movie in the Trek canon. It contains a scene that gives just about everyone the willies. Ricardo Montalban plays super soldier Khan, who, having been stranded on a remote planet during the original TV series run in the 60’s, now emerges from his exile – targeting poor Chekov, now a commander. Khan grabs the Russian man’s head and opens his hand to allow a creepy mind control eel to slither into Chekov’s ear.

If you look closely, the eel larvae almost certainly was inspired by the insect we’re highlighting today – the common Earwig.

Forficula auricularia looks pretty disturbing and they are predatory insects that will eat just about anything. Adult earwigs grow to about a half an inch long, ending with pincher-like forceps, called cerci, and are dark brown or reddish brown in color. It probably doesn’t help that they have antennae that are segmented into fourteen parts!

They’re relatively new to the United States, only spotted here since 1907. Their nightmarish name comes from a European old wives’ tale that they crawled into people’s ears, burrowed into their brains and laid eggs there.

While earwigs do enjoy burrowing under leaf debris, in cracks and crevices, and in other dark locations, they rarely – if ever – crawl into people’s ears. We say rarely because there are always stories, almost never corroborated, about rare instances of it happening.

Mother of a Muncher

The truth is, earwigs are nocturnal – they’re not looking to crawl into our ears – or burrow into our brains – at night. They’re running around chewing up our vegetation. Farmers and vintners are the most threatened by these nighttime eaters.

While earwigs are omnivores – like us, they’ll eat anything – they usually prefer to munch on leaves and stems of many crops, especially certain fruit vines like raspberries. Earwigs in grapevines are maybe the most damaging. A miniscule amount of earwig droppings – or earwigs themselves accidentally harvested – can make a significant difference in wine taste.

But they often do more good than harm. One of their second favorite foods happens to be the aphids that wreak even more havoc on crops and flowers.

Earwigs are unusual in other ways too. Unlike most insects, female earwigs (straight pincers) take an interest in protecting their eggs after laying them. They kick the males (curved pincers) out of the nest and care for the eggs. They groom them, cleaning off harmful bacteria, and treating them with a biological anti-fungal agent.

They’ll even watch over and defend the larvae for a few stages of their development. Depending on the specific species, earwigs go through five to six molts before emerging as adults. Most earwig moms will linger through at least the first two transformations. And in the case of the hump earwig – the babies’ final stage of development results in eating their mother!

Earwigs generally stay outside but on occasion can infiltrate a home. The easiest way to prevent their entry is to check and, if necessary, reseal the edges of doors and windows, soffit and fascia, and anywhere wires come into your home.

The good news is our most popular solution – Go Green Perimeter Plus – does just that. On our initial inspection of your home, we pinpoint those potential access points and make sure to recommend they’re sealed. Then, our perimeter treatment  keeps cockroaches, ants, silverfish and other pesky insects out of your home along with the earwigs. For more information, or to schedule your first appointment, just give us a call!