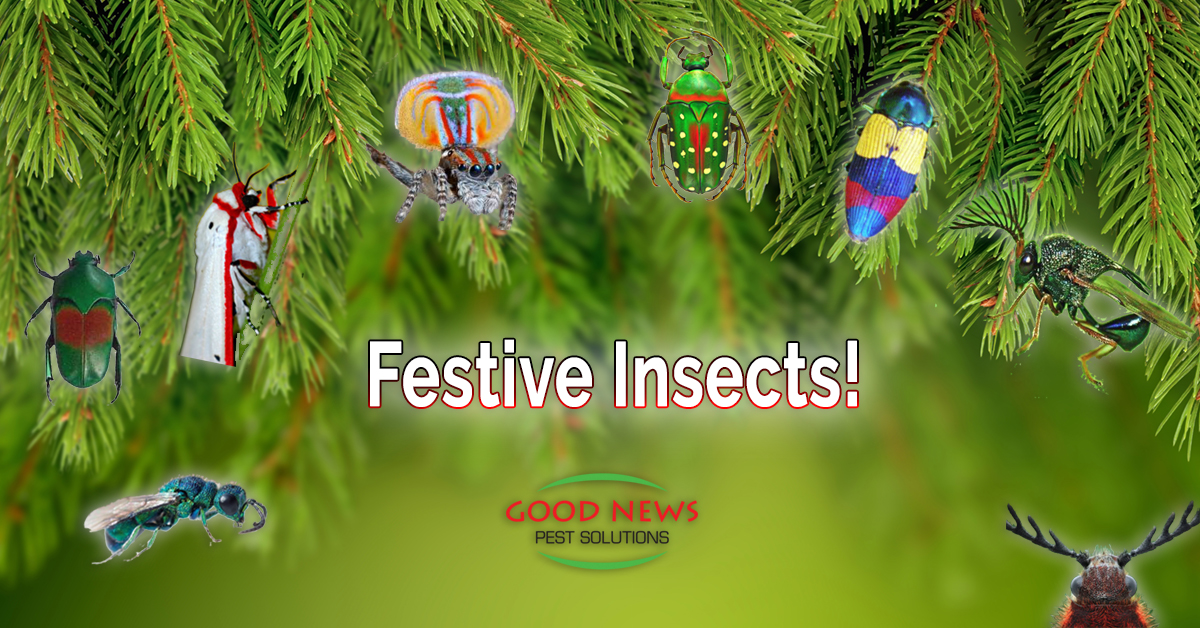 Here at Good News Pest Solutions, we are always amazed at the incredible diversity of the world God has created for us. Take the insect world – that is the business we’re in, after all! – there are approximately 1-million species of insects we have catalogued and are currently being studied. And scientists estimate that there are 30-million species on earth – with a combined population of 10-quintillion (aka 10-trillion billions) bugs!

Since we’re entering the Christmas season, one of our favorite times of year, let’s look at some of the most colorful bugs we’ve found. These insects are so sparkly they’d fit right in with the Christmas ornaments on your tree.

Let’s start with the Holly Berry Bug. This Coccinellidae is a close cousin to the Ladybug – but without the spots. Sitting on a leaf it looks like a flavorful berry – ironic, since their bright coloring is to let predators know they’re poisonous.

The Dogbane Beetle is found primarily in the Rocky Mountain area. Its iridescent green and purplish-red coloration is very reminiscent of those sparkly mercury glass ornaments that grandma used to hang on her tree.

The Candy Cane Moth is named for its white body, trimmed with bright red edging on their wings and head-parts. Chionarctia nivea is usually spotted in Russia, China, Korea and Japan.

The Horned Click Beetle has a somewhat unique set of antenna that look more like deer antlers than anything in the insect kingdom. It’s often spotted in Denmark and Hungary.

Another similarly-styled bug is the Antlered Wasp. Thankfully, this flashy wasp with antler-ed antennae doesn’t sting humans, but actually attacks other wasps.

Another parasitic wasp, the Cuckoo Wasp is closely related but much prettier. Imagine a bedazzled wasp, bright with an iridescent blue and green exoskeleton over its whole body. And scientists are stumped as to why. Some things are just pretty for the sake of beauty.

Our friends in Australia must be big fans of the holiday season – they have several bugs with Christmas-themed names!

Christmas Sweater Beetles are found primarily in Queensland, Australia. Their name comes from the distinctive jeweled stripes of yellow, navy blue, red and green – definitely not an ugly Christmas sweater!

Mistletoe Beetles all but light up! Their inch and a quarter bodies are hued with electric green or blue with a bright reddish-orange band across the center. Occasionally, they’ll sport a little extra decorative spots.

While their black with a splash of red coloring means they’re not as colorful as some of their counterparts, Christmas Beetles get their name from the fact the adult scarabs start popping up between November and January. They feed on eucalyptus and can also be found in some parts of Europe, but are mostly found in the Australian territories.

The Coastal Peacock Spider isn’t necessarily holiday themed but it’s one of the most colorful arachnids in southern Australia. The main portion of their bodies are bright yellow with lines of blue, green, red and orange resembling a peacock’s plumage. They’re also famous for their intricate mating dances.

As pretty as they can be, if bugs start to interrupt your holiday festivities, we can help! Our Go Green Perimeter Plus is our most popular solution. It handles the most common insect invaders on the Gulf Coast of Florida safely and efficiently. For more details, or to schedule your first visit, just give us a call!