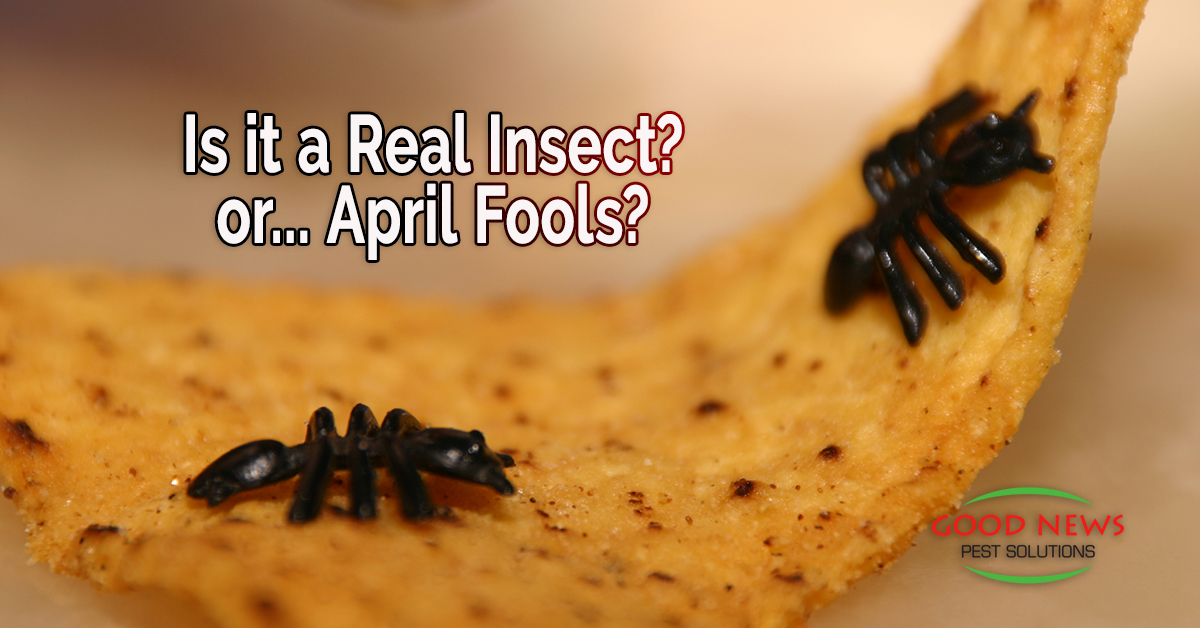 Tomorrow we celebrate one of the trickier days of the year – literally! Since long before the United States existed, people and cultures across the globe have marked April 1 as April Fools’ Day. And it seems like lately everyone and their corporate brother is doing their best to one-up each other.

Google has a big April Fools’ prank every year, which backfired in 2004 when they legitimately launched Gmail on April 1st. For years Netflix offered new faux features on April 1 as well. One of the more famous, yet nearly believable, April Fools’ Day pranks was the Taco Bell announcement that they would be buying and rebranding a famous national monument as the Taco Liberty Bell. With companies sponsoring sports stadiums and music festivals, it didn’t seem like too much of a stretch.

In the insect world they may not know what April Fools’ Day is, but some bugs seem to celebrate it just the same. The difference is they do it year round – and for their own protection!

Did you see that? That stick just moved! No, it wasn’t the wind or a trick of the light. It wasn’t a stick at all, but a Walking Stick! The order of insects known as Phasmida wanders the grasslands and bushes of their habitat disguised as mere sticks. A few of them sport wings but seldom fly, keeping their wings tightly to them, appearing to be wilted leaves. The bugs even move in more of a drifting manner, looking like sticks buffeted by the breeze.

Underwing Moths have multiple trickster defenses against their natural predators, birds of the air. First, their varied brown wing colorations and patterns help them camouflage. Their markings are the perfect combo to help them blend into the leaves they often linger on, especially when they’re on the leaf underside. Even humans can walk right past without seeing them. But on the rare occasion that a bird does spot them and swoops in for lunch, the moths flash their hindwings that are bright red and yellow, fooling the birds into thinking they’re being attacked, and they veer off.

Is it a Bee or a Hoverfly?

The next time you see the traditional yellow and black banding of a bee floating around picking up nectar and pollen from a flower, look closer. Syrphid flies exercise what’s known as Batesian mimicry. While they look and sort of act like bees, they’re definitely not bees. For one, they hover. And they have no stingers, no way to defend themselves – except that predators mistake them for bees that can sting and give them a wide berth.

These creatures are an interesting feat of God’s grand design. There are two species who share a common look, similar warning signals, and the same predators. This may sound counterintuitive, but consider this – once a predator has determined that something tastes horrible, they’re likely to avoid it altogether. So one encounter protects two species! While Müllerian mimics appear throughout nature, our favorites are the butterflies. Several tropical species of butterflies are mimics. And closer to home, both Monarch and Viceroy butterflies share the same appearance, helping each other deflect hungry birds who learn to avoid their bright orange and black trimmed bodies.

One pair of insects you don’t want to mix up are flying ants and termites - and neither is an April Fools' joke. One is annoying, the other will quite literally eat you out of house and home. Termites are responsible for millions of dollars of damage every year and Florida’s semi-tropical weather is a big draw. That’s why we offer our Term Assure 365 – the best termite protection on the Gulf Coast, backed by a $1-million damage warranty. This Good News Pest solution is a modest investment to protect your home – because most homeowner’s insurance policies don’t cover termites. For more details, or to schedule your initial consultation, just give us a call!