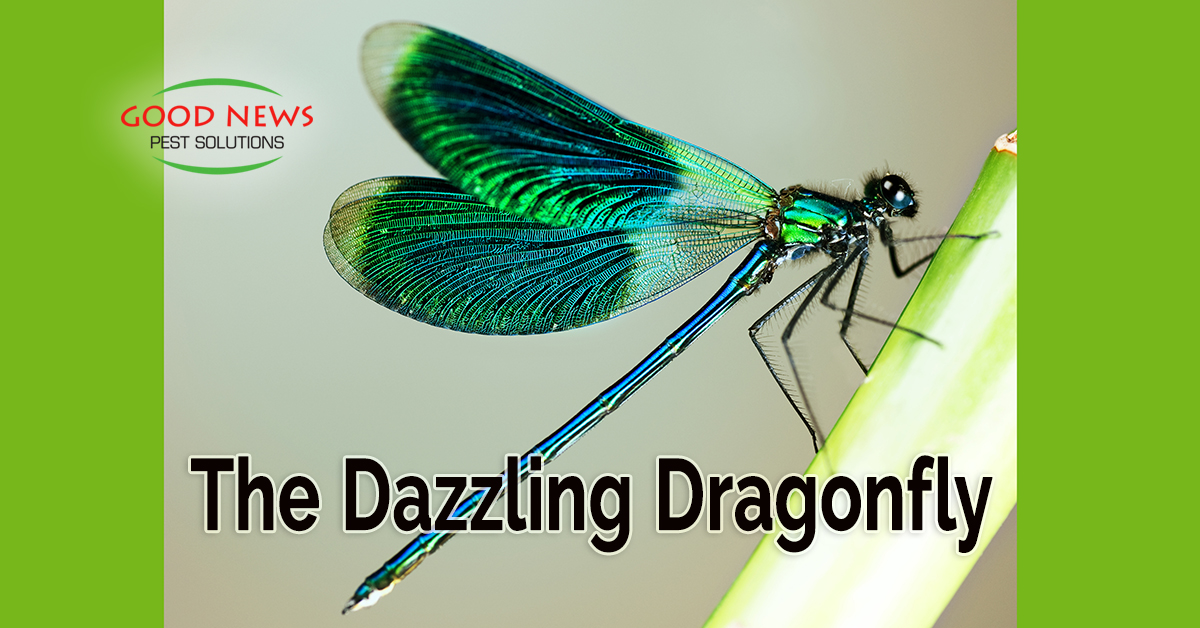 Unlike the rest of the country, here on the Gulf Coast of Florida we don’t have to wait for the summer months to see spectacular sights flying around our yards. Not only are dragonflies cool to see – their iridescent bodies zipping through the air – they’re also very useful as pest protection!

Outside of being beautiful aerialists, dragonflies are an interesting study of complications, inconsistencies, and mythological legends. Here are just a few.

The first known reference to dragonflies came in 1626 when Francis Bacon published a natural history book of sorts. In it, he compares them to butterflies, referring to the temporary nature of their brightly colored beetle-like bodies.

There are some 5000 species of dragonflies, over 100 of which can be spotted in Florida. But their time on this earth is usually pretty short. Dragonflies start life as eggs, eventually hatching in water. Once they emerge, their nymph form can linger in the water for a few weeks to almost two years.

When they finally pop out as adults they’re doing a lot of mating, flying, and devouring insects for the few days or months they’re around. The adult phase of a dragonfly’s life is usually its shortest, lasting for  a week or two at most. Some last a full two months and a couple of larger species will live up to seven years!

Maybe because of their overall short life span, dragonflies appear in the stories of many cultures as being connected to death. Dragonflies can be messengers from the spirit realm, connecting those on earth to their lost loved ones. They can bring reassurance and hope that there is a life beyond.

Some ancient Chinese and Asian legends take it one step further – the dragonfly is the messenger of the gods. While that belief is less prevalent now, it’s one of the reasons dragonflies are a popular symbol for good luck and are used in Feng Shui.

Some cultures believe the communication works both ways and dragonflies can be conduits to reply to the spiritual world as well. A few, especially Native American communities, believe that dragonflies represent – or actually are – the next step of the spirit – passing from our earthly life to a mystical form that appears to be a dragonfly. And some legends say that the dragonfly has four wings – the extra two used to transport souls to Heaven and messages back to Earth.

Some darker legends portray the dragonflies as bringers of death or its representative. And in a way, they’re right – if you happen to be a mosquito.

We like talking about dragonflies in a much more practical sense – as the number one natural predators to mosquitoes. Even in the nymph stage, dragonflies are active participants in pest control, devouring mosquito larvae before they even get to biting us. And adult dragonflies eat up to 20% of their weight every day – mostly consuming Florida’s favorite annoyance.

The speed of a dragonfly’s flight, combined with their huge compound eyes and recently discovered olfactory senses, combine to make them formidable predators indeed. They devour flies, midges, even tadpoles and other dragonflies!

So, when you see a dragonfly, admire its beauty, its weird aerodynamics, and its helpful work in eliminating annoying insects.

But for those mosquitoes that aren’t eaten by glittering dragonflies, we recommend our No Bites Zone Mosquito Protection Program. It not only stops mosquitoes from biting people and pets but also makes their babies vegan – they won’t be biting you either. It’s affordable and easy to set up in your yard – and we can deliver it with your usual Good News Pest Solutions service. To find out more, why don’t you give us a call!