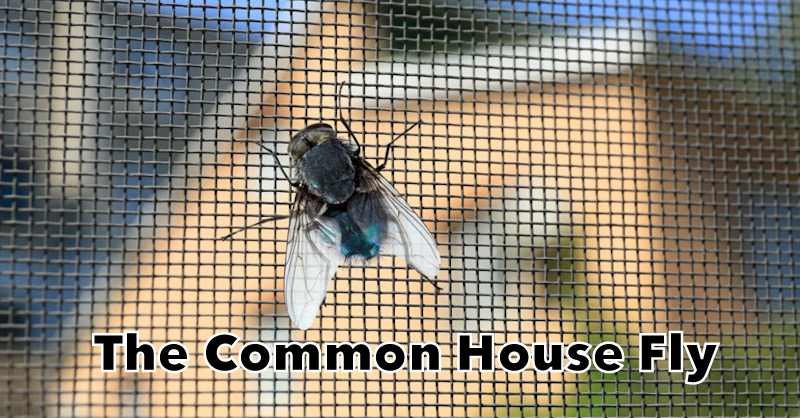 Even though summer doesn't officially start until later this month, we’re already hearing some buzz about one of the most annoying insects of the summer - the common house fly.

Believed to have originated in the Middle East, house flies have spread almost always in concert with humans. As we ventured across the globe, Musca domestica have followed us from continent to continent, region, city and community.

House flies sport dull gray and yellowish bodies striped with lines on their thorax. Their ability to avoid being swatted comes from their incredible compound eyes. They can glimpse up to 4000 facets at once. Similar to bullet-time in the Matrix movies, time slows to a crawl from the fly’s perspective, allowing them to anticipate and avoid our hands and insect swatters.

The legs and feet of a house fly are coated with a secretion produced by tiny pads under their feet. This enables them to virtually defy gravity even without flying. So you often see them hanging upside down and scaling walls. It’s also one of the reasons house flies are such a gross threat to humans - the “goo” also grabs and holds onto millions of microorganisms, dragging them into your home and dropping them wherever they land.

Along with the various diseases and viral fragments the flies carry with them, they double down by hanging out near rotting vegetation and fruit, feces, and garbage. So they’re more inclined to bring the worst of the worst into your home. As they eat, they are constantly defecating, dropping fecal matter on us, our surfaces, and most disturbingly the food we’re eating.

A female fly will mate only once but holds the eggs in her body. She’ll lay around 100 eggs at a time. Look for small, rice sized white eggs in your trash, garden or grass clippings, which quickly develop into maggots and then full-grown flies.

To help prevent flies, keep your garbage cans covered and remove trash as soon as the bag is full. Check your attic and crawl spaces for dead rodents and squirrels. Clean up pet poop in your yard as soon as you can. Keep an eye on your fruit bowl - the riper fruit becomes, the more it attracts flies. Also clean up spilled drinks, especially fruit juice or soda.

In extreme cases you may need professional help. In addition to our Go Green Perimeter Plus solution, we also can help rid your home of house flies while keeping your family safe.

For more details on how we deal with houseflies and other insect pests on the Gulf Coast of Florida, just give us a call!