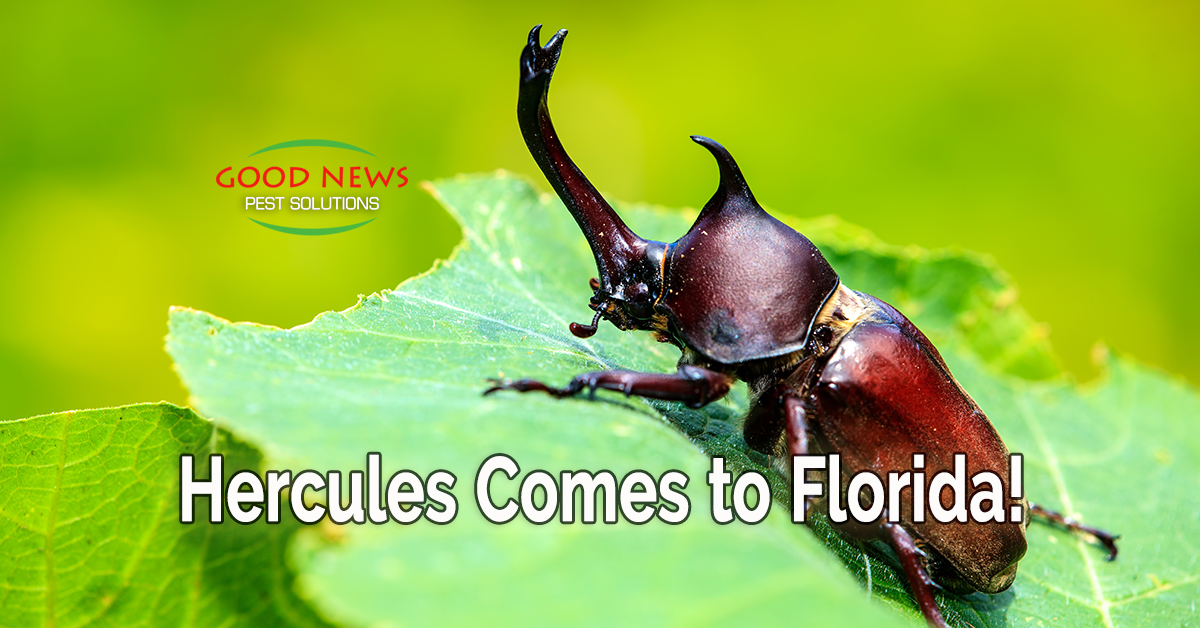 Well, we’re not sure how big, an accomplishment this actually is, but a new insect invader has just popped up in the state of Florida – and not in Orlando or Miami, but right here in our Gulf Coast backyard.

Earlier this summer, Travis Williams was strolling down Del Prado Boulevard in North Fort Myers when he spotted something strange. Set back away from the curb was a giant beetle. It was dead so it had lost some of its usual color – the body appearing grey. But the species of the bug was easy for even amateur entomologists to identify because of the size and the giant horn protruding from the body.

Williams had found a Dynastes Hercules – also known as a Hercules beetle – the first ever discovered in the Sunshine State.

The Hercules beetle is a member of the rhinoceros subfamily of beetles – closely related to the Egyptian scarabs we know from The Mummy movies. The Hercules is the largest beetle, if you count the horn, and one of the largest flying insects in the world. Yes, you read that right.

As you can imagine, the distinctive horn is the beetle’s most distinguishing marker. It gets the name Hercules though from its strength – they’re able to carry up to 85 times their body mass. Hercules was the Roman god from mythology who had immense strength. Hercules in myth was well known for fighting monsters and starting battles from which he would inevitably emerge victorious.

The South American beetle follows in its namesake’s pattern in this as well, as Hercules beetles often face off against other male Hercules beetles (only the males have horns). They can make a huffing noise to scare off potential predators, but one on one, males will battle each other for the right to mate with females.

Picture it like a WWE wrestling match. The two beetles circle, sizing each other up, then quickly strike! Their horns collide, sometimes damaging each other – and sometimes even the female they’re vying for – then try to grab hold with the horn to lift and fling the other beetle away.

The winner gets to mate with her that day, and about 30 days later, she lays 100 eggs on the ground that will hatch within the month.

The larval beetles will eat rotting wood for about two years before they molt and switch to fresh and rotting fruit as adults. In captivity, adults live for three to six months but might last longer out in the open.

Thankfully, the Hercules beetle has no negative impact on humans or crops other than being a bit scary looking. Since they’re nocturnal and usually live in the rain forest, you likely wouldn’t see them too often – and certainly not in Florida. As for the one found in N Ft. Myers, Florida Fish and Wildlife thinks it was likely an escaped pet.

If you spot a Hercules beetle or any other bugs in your home, we’re here to help! For Hercules beetles we would do an exclusion – safely removing the tropical insect from your home and returning it to where it can serve the ecosystem. For most other insect needs, our Go Green Perimeter Plus does the trick, keeping your home bug free year round. For more details or to schedule your first evaluation, just give us a call!

Tags: beetles, rhinoceros
« Back to Blog