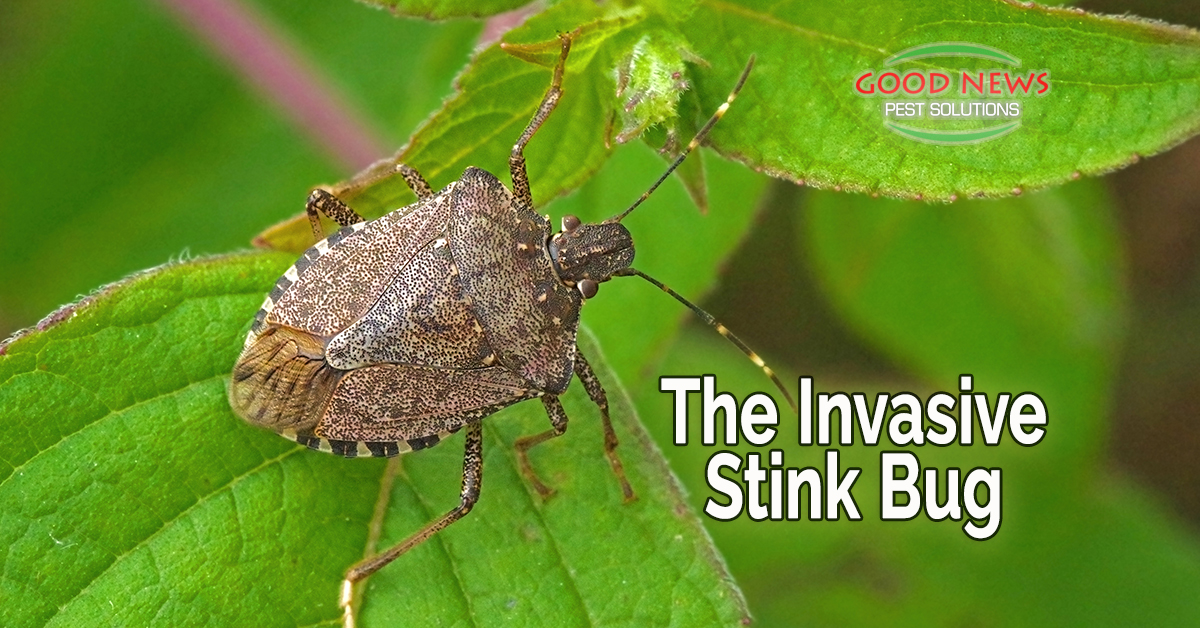 It’s hard to imagine now with temperature and humidity in the upper 80s and early 90s all this month, but before you know it we’ll be grabbing jackets and certain bugs will start to look for ways to sneak into your home to ride out the winter in a cool, dry area.

One of the most frustrating of these insects is the Brown Marmorated Stink Bug. Introduced into the United States around 1998, this Eastern Asian relative of the bed bug is an accomplished hitchhiker. They’re known to hop onto parked vehicles, cargo containers and RVs, which is how they spread throughout the nation so quickly.

And when temperatures eventually drop and daylight hours get shorter, they’ll be looking for a cozy place inside your home for a few months. The good news is they don’t bite humans – they’re mostly inside to hibernate. The bad news is – they cost our Florida agriculture millions every year.

What to Look For

Halyomorpha halys can actually appear green, gray or brown, sometimes with a little dark red. They measure between a half and three quarters of an inch, making them the largest stink bug. Females tend to be larger than males. The outside edge of their torsos and their antennas are striped with little alternating white and black bands. Unlike many other stink bug species, they also have rounded shoulders on their shield-shaped bodies.

They get their common name from the horrible smell that emanates from their bodies when crushed. Just try stomping on one and you’ll quickly get the picture.

From egg to adult, the growth time for these bugs is 40-60 days. Generally, stink bugs will linger for one or two generations, but thanks to our subtropical weather in Florida, that can extend to three to four generations.

The proper term for brown marmorated Stink Bugs’ winter ‘vacation’ is a winter diapause. It’s triggered by shorter hours in the day, not necessarily by cooling temperatures. In the spring, lengthening days “wakens’ the bugs up to head back out into the fields.

Again, brown marmorated Stink Bugs are mostly a nuisance inside our homes, outside is a different issue.

Because they’re polyphagus – they can eat several different foods and vegetations – their almost insatiable appetites can be served by multiple crops. So its not just one field or orchard that is at risk.

Early infestations found brown marmorated Stink Bugs feeding on sweet corn, beans, tomatoes, and soybeans, which was enough of a problem. When they got to Texas and California, they shifted to fruits and nuts. Apples, peaches, pears, oranges, hazelnuts and almonds were now on their menu. And while the stink bugs weren’t eating everything the fruits they did eat exhibited necrosis or were discolored. Some fruits, like peaches, will continue to grow around the bitten spaces, making the peaches malformed and unsellable at most grocery stores and many farmer’s markets.

Further, in an attempt to rid agricultural areas of the invasive pest, dangerous chemical pesticides, toxic to helpful insects were applied. So far natural means, even introducing natural predators to the stink bugs, have been ultimately unfruitful.

Thankfully for those of us who live in the Sunshine State, in sixteen years, Lake County – northwest of Orlando-Kissimmee – is the only confirmed established population of brown marmorated stink bugs in Florida to date.

If you do encounter stink bugs in your home, sweep them out as carefully as you can. The best way to prevent their incursion is to use window and door screens, and make sure all access points of your home – soffit, fascia, gutters, windows, doors, foundation – are free of cracks or have been caulked closed. This is one of the first things we check when we come out to provide our Go Green Perimeter Plus pest solution.

If you’d like to learn more about any of our family and environmentally safe solutions to pests on the Gulf Coast of Florida, just give us a call!