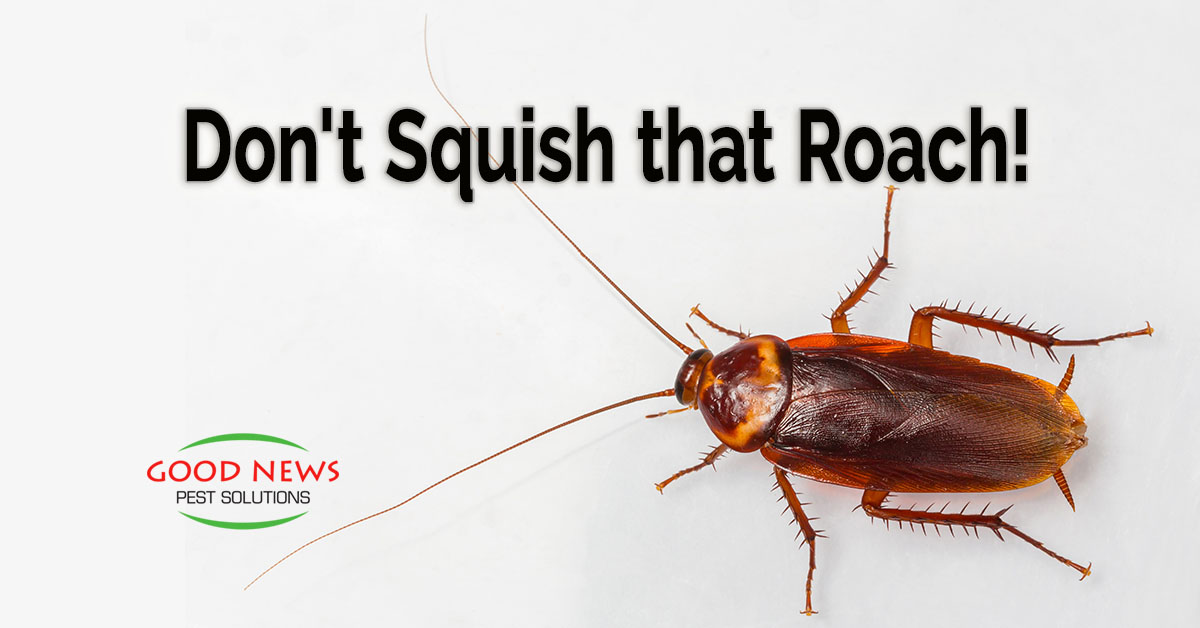 We get it. The first reaction after seeing a cockroach – right after that visceral, creeped out gasp of fear -is to STOMP. Or swat, or grab a shoe or magazine and obliterate the offending bug.

But as bad as living cockroaches can be for your health and cleanliness, executing them could be worse – if you’re even successful.

Before we get into the dangers of smashing a roach in your house, let’s first look at how hard that really is to do.

You’ve heard – hopefully here – that ants can lift and carry up to 20 times their weight. Well, cockroaches can support 900 times their weight. That’s about half a pound of pressure. That may not seem like much, but add that to the fact that the cockroach is flexible, and anything less than a direct hit not only won’t kill it, it’ll send it scurrying faster than you into the nearest hiding place. And they have a lot more secret spaces than your kids do when they are playing hide and seek.

But here’s the other thing – sometimes killing it doesn’t actually stop it. Cockroaches can withstand serious injuries and survive for months without food. They can even keep on going after they’ve lost their heads! It’s also been speculated that roaches are so resilient, they’ll survive an atomic bomb, in case you’re considering the nuclear option.

Thankfully, unlike those 50s creature features streaming on Prime Video right now, the radiation isn’t mutating them to come back big, angry and able to take out your house. But experts say sometimes cockroaches do play dead, so it’s hard to be sure you’ve eliminated it. So don’t just throw the body in the trash can – you’ll want to full on Dexter that puppy within a plastic trash bag.

The other danger of smashing a roach with your boot is that you will kill it. As you’re probably aware, cockroaches are some of the most disgusting insects on the planet. Right up there with house flies, roaches carry salmonella, cholera, gastroenteritis, dysentery, typhoid fever, leprosy, and even some viral diseases.

Yes, it’s dangerous to ingest food after they’ve crawled over it, so your pantry is at risk. But it’s also dangerous to stomp or smash them because the particles can get sent into the air where they can be swallowed or inhaled.

And when you retrieve the dead bug your hands can become contaminated. If there’s one thing we learned in 2020, traditionally people aren’t that great at washing their hands. You’ll want to use that newspaper or magazine, tissue paper, paper towels – something to pick it up with – and discard with it. Sorry, that special marlin issue of Florida Sports Fishing is now more than a guilty pleasure. It’s got nasty bug guts on it and needs to be thrown away – again, in plastic if at all possible.

All For One, One For All

Oh, and one more thing. It’s never just one. If you’ve seen one cockroach, even if you kill it, there are likely many more in your house.

That’s where we come in. Our Go Green Perimeter Plus solution not only eliminates roaches, ants, silverfish and other creepy crawlies from your home or office. It’s also the safest, most effective pest control option out there. We use the finest green products to make sure your family is protected from bugs but also from harsh chemicals – many of which don’t even bother cockroaches anymore.

For more information on Go Green Perimeter Plus or any of our other family-friendly pest solutions, just give us a call!

Tags: roach disease
« Back to Blog