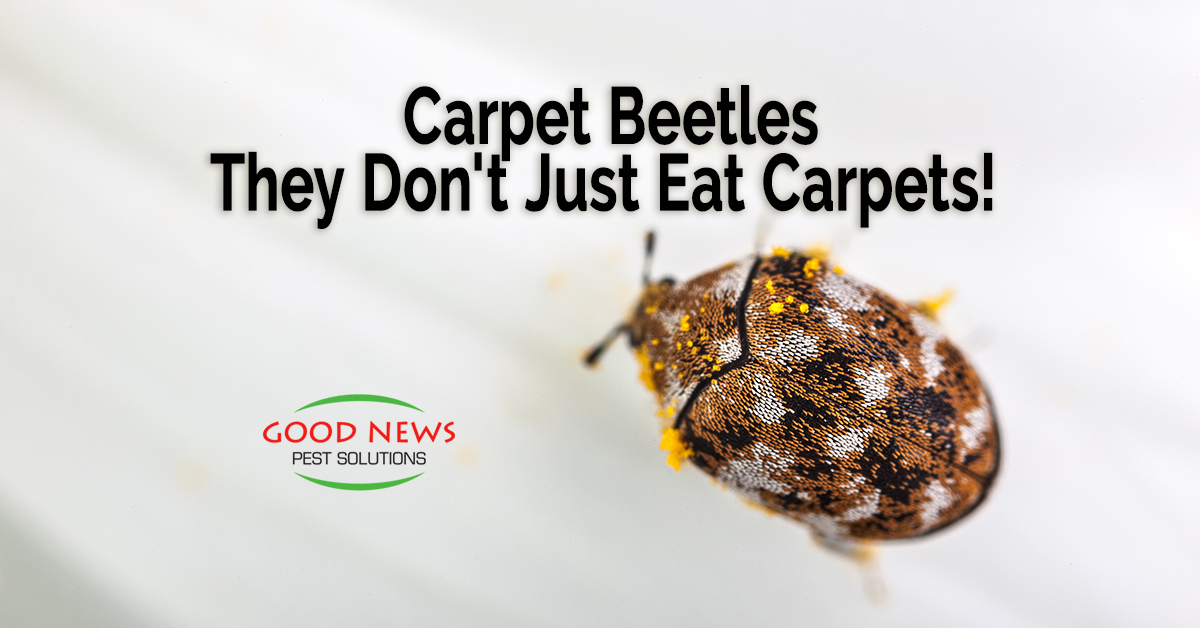 We all love Indiana Jones, Lara Croft and Nathan & Sully in Uncharted? The point is they’re fun adventurers. We love it when Harrison Ford is trading out the sand for the gold idol, lifting the Ark of the Covenant out of a pit, or taking a ‘leap of faith’ across a chasm to find the Holy Grail. But that’s not really what archaeologists do. Their real lives are painstaking, detail-oriented and likely even more boring for most of us than the 5 minutes we spent in the classroom in Raiders of the Lost Ark.

But real archeologists often use insects to help with their jobs. And no, we’re not talking about the sand scarabs Rick O’Connell scares up in the Mummy movies. Carpet beetles that will eat us out of house and home – or at least our carpets, sweaters and furniture – are hugely valuable to true scientific treasure hunters.

Carpet beetles, or dermestids, come in many variations, but in North America, and in Florida especially, we usually see three main types.

Anthrenus scrophulariae are what we refer to as common carpet beetles. They vary from one tenth to nearly a quarter inch in size. They tend to be mostly black with some white spots (actually scales) speckled across the body. Their wing cases are black with orange or reddish scales.

Despite the name, these are the least commonly seen on the Gulf Coast of Florida, since they prefer cooler temperatures.

Anthrenus verbasci, commonly known as varied carpet beetles, on the other hand, love Florida as well as most of the world, although warmer temperatures may cut a few hours off their typical life span of 2 weeks. The varied beetles are the most colorful of the three varieties with scales in an irregular pattern of white, brownish and yellowish patches.

Anthrenus flavipes, or furniture carpet beetles, thrive the most in warmer temperatures, and while they have some of the same colors as the varied beetles, they have fewer lighter colored scales on average. They tend to be the largest of the three varieties and live the longest.

The Problem is the Larvae

It should be noted that by the time you see a carpet beetle, it’s damage is already done. The adult beetles feed off of nectar and pollen. At this point, the main danger is the eggs they’ll be laying or have already laid.

Once hatched, the larvae go through a series of molts before pupating into the beetle form. During that time, they are larger than their beetle form and quite hairy. They’re often referred to as ‘wooly bears.’

Each variation of the larvae enjoys its favorite flavor – but they all feast on various natural fibers and animal products, which makes them an issue in your home. They devour cloth, cotton, carpet, keratin and dead animal flesh. Everything from your carpet to your clothing to your furniture, drapes and even taxidermized animals are sources of nourishment for the growing insects.

Their damage is sometimes mistaken for clothing moths, the difference being the moths leave behind webs after they chow down on your cashmere.

Wait, What About the Treasure?

Because dermestid beetles feed on just about anything organic, museum technicians have cultivated whole colonies of carpet beetles, and their close relatives, khapra beetles (also called skin beetles) for the sole purpose of cleaning skeletons.

Sure, it’s not as cool as outwitting the Nazis or seeing their faces melt in the movies when they try to steal the power of God. But we do actually get to see the skeletons on display, not secreted away in a plain wooden box in a warehouse for all eternity.

If you see a carpet beetle, you’ll want to vacuum all the carpets, rugs, drapes and upholstery in your home. Some folks prefer to go all the way and have everything steam cleaned.

You can use mothballs in your closet and sprinkle boric acid in your carpet and on your fabric furniture. Use a water and vinegar mix to wipe down surfaces and window sills.

Of course, the best way to deal with a carpet beetle infestation is to avoid it in the first place. Sealing up cracks in your walls, foundation and potential insect entry points will prevent carpet beetles from getting in. That’s also our first recommendation when we treat your home with our Go Green Perimeter Plus.

You may not need our help with carpet beetles per se, but our solution takes care of the most prevalent creepy crawlies we’ve found on the Gulf Coast of Florida. For more details on that or any of our green, family-friendly pest solutions, just give us a call!