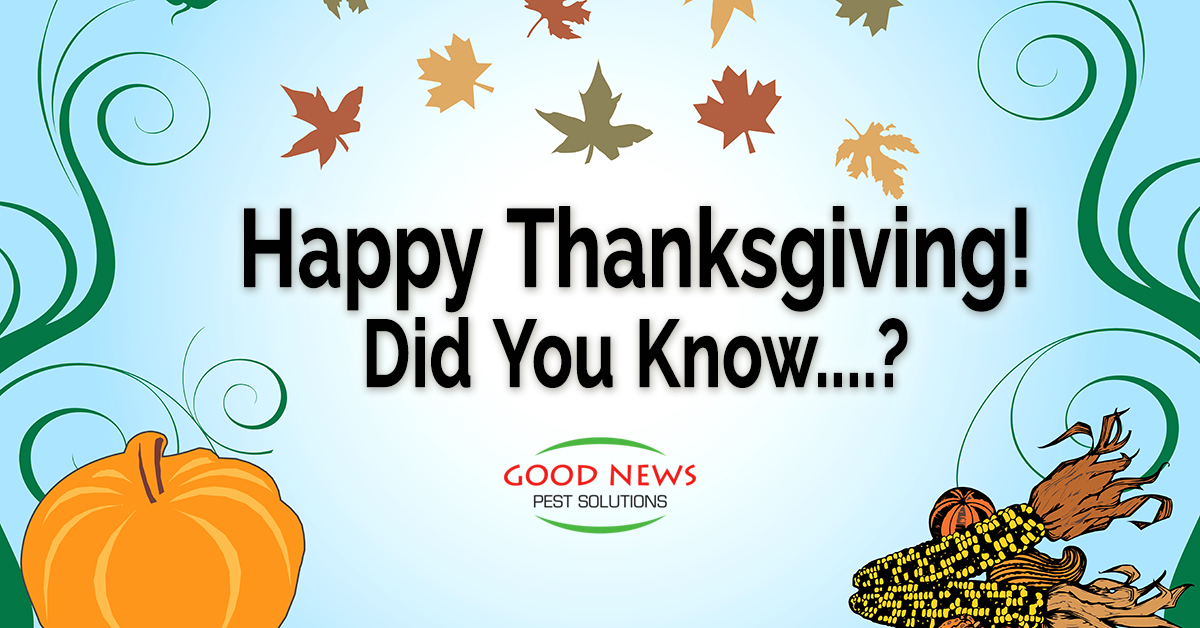 Happy Thanksgiving! Did You Know....?

It feels like just last week we were gearing up for trick-or-treating, and now here we are on Thanksgiving Day!

It’s the time of year when holidays come fast and furious. With Christmas, Hanukkah and New Year’s all in the very near future, the busy-ness of the holidays is about to explode. It used to be everything kicked off tomorrow, but for some retail outlets, Black Friday lasts all month!

Isn’t it good to start things off with a day of (some) relaxation, food, family, and giving thanks?

While Thanksgiving has a rich tradition, a lot has changed over the years. The history of the holiday is a fascinating tale.

For example, did you know the first Thanksgiving lasted for three days? Whether the Pilgrims contributed a lot or not is up for debate. But between the food provided by the neighboring Wampanoag tribe and the bountiful corn harvest, the first November festivities lasted for three whole days and likely included venison, duck, goose, oysters, lobster, eel, and fish, but not turkey.

A popular Thanksgiving morning tradition for many families is watching the Macy’s Day Parade and spotting their favorite balloons. But for the first three years of the parade there were no giant inflated characters – but there were zoo animals! In 1927, the first balloons debuted along with puppets on floats and, of course, Santa Claus!

While the first Thanksgiving pre-dates the United States, it didn’t become a national holiday until Abraham Lincoln declared it so in 1863. He was persuaded by Sarah Josepha Hale, famous for writing the song “Mary Had a Little Lamb” and writing to Congress and five sitting presidents for 17 years advocating for the declaration.

It wasn’t until FDR took office and we entered World War II that setting the fourth Thursday in November as Thanksgiving every year was added to the law of the land. Oh, and while both Presidents Kennedy and Nixon let their turkeys go, the formal pardoning of a turkey didn’t happen until President George HW Bush made it official in 1989.

Side Dish Side Effect

Is it better the day after? Setting aside Friends obsession with Ross’ “moist maker” sandwich, a 2015 poll found that 8 in 10 Americans preferred the Thanksgiving leftovers to the actual dinner feast. Or maybe they just didn’t feel overstuffed and sleepy – hard to tell. We also eat 50 million pumpkin pies – but the most popular Thanksgiving dessert is apple pie.

Now that everyone has a microwave, you may be too young to remember the aluminum trays that our parents pulled out of the oven and then peeled back foil cover to enjoy their TV dinners. But the original individual serving meals – that cost less than a dollar! – came from Swanson. An overzealous employee ordered too many turkeys in 1953, leaving a train car filled with 260 tons of frozen turkeys. A salesman came up with the idea to make pre-packaged meals for busy families and we’ve never looked back.

Think you’re too full? Americans devour an estimated 704 million pounds of turkey. Although to be honest, that estimate was made several years go – so it’s likely we eat even more fowl (and a little ham) than that.

The average calories consumed by each person at the dinner table? 4500. Considering the recommended daily healthy calorie intake is 1600-2400 for women and up to 3000 for men, it’s no wonder you may feel bloated when you fall asleep in front of the football game after dinner.

Finally, Butterball, arguably the turkey experts in the US, operates a call center hotline that takes more than 100,000 calls with turkey cooking related questions just between November and December.

Of course, the most important part of Thanksgiving is taking the time to be with family and friends. Whether you’re celebrating with a huge table full of people or just a having a few close friends over, we hope you have plenty to be thankful for.

Good News Pest Solutions will be closed on Thursday and Friday so our team can celebrate the holiday with their families. We wish you a blessed Thanksgiving. We’ll see you next week.