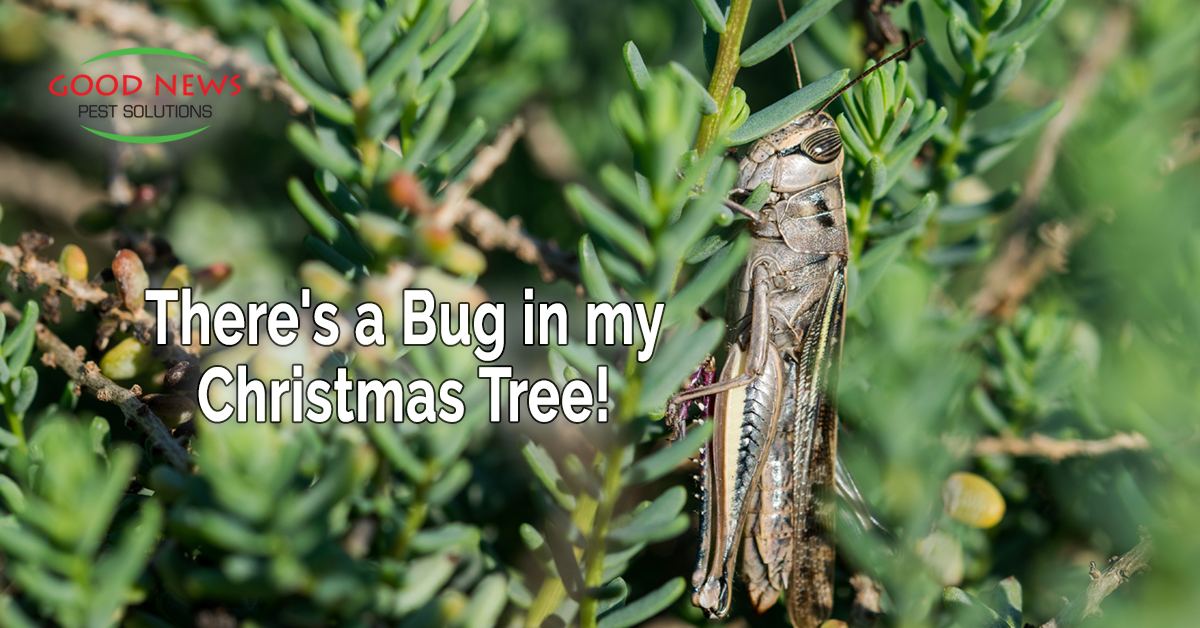 There's a Bug in my Christmas Tree!

For many families, the week after Thanksgiving is when they start shopping for Christmas trees. Here in the Sunshine state, if you want a real tree instead of one of those metal or tinsel ones, it’s not like you can go out into the woods and cut it down. You have to purchase it from a tree lot that ships them in from Wisconsin or Michigan or another Midwest state. Unfortunately, this presents some interesting challenges that you wouldn’t face if you were harvesting your own tree.

For starters, those trees come from colder climates. They’re usually shipped here as fast as they can be from our Northern forest areas so they stay fresh. But the closer they get to us, the warmer they get and the more likely they’ll pick up hitchhikers along the way. And even if they don’t, once they’re delivered to the vacant lot that just had a bunch of pumpkins, there’s a whole new class of unexpected vagabonds that can hop onto the fresh pine.

Depending on the circumstances, there are eight different insects to be on the lookout for this December.

A lot of times we consider aphids to be a threat to our flowering plants. They love to suckle on the sap in certain flower stems as well as that tangy fir tree bark. A careful observer can even spot them on our slash pines in the area. Some of them may develop wings, but most of the time you’ll spot these critters hanging out on the lower, often thicker tree branches, just slurping away.

Be careful dealing with Aphids, though. Squashing them will leave a red or purple stain on your fingers and furniture. You’ll want to shake out your tree – hopefully, the tree lot will have started that process for you before they wrap and strap it to your car. If you notice a lot of them, try spritzing the underside of the tree with a solid blast from the garden hose.

Psocids are small winged insects you may or may not spot on your Christmas tree. They’re most often noticed when they take flight. But they’re also not a bad bug to welcome into your home. Even though their common name is bark lice, they don’t feed on humans. In fact, they help clean away the mold and fungi that might be on your tree branches – especially if you also have aphids!

Bark Psocids don’t usually last long in our homes. They’re generally much less active between December and February. They also crave humidity, which tends to be in short supply inside – and unlike some more damaging insects, they don’t seek it out in our bathrooms.

Where there are bugs you’ll inevitably find things that feed on bugs. I know, spiders are creepy – but they are nature’s pest control. Which is why they may often be found in Christmas trees that have been collecting critters. Honestly, it’s better off to leave them be.

On the other hand, you’ll want to keep away their cousins. Mites and spider mites can be damaging to the plants they infest in general, and can put a premature end to your holiday festivities.  Mites can leave little red stains on your ornaments and carpet – and cause premature needle drop. One sure sign of problems – a pine tree with a bird’s nest. Leave that one on the lot.

Praying mantises are often considered good luck – except for the males during breeding. But they’re not the most pleasant house guests. Just last year, a woman in Tallahassee found three small brown lumps in her Christmas tree. Those lumps – about the size of a match head – can contain between 100 and 400 praying mantis eggs.

And trust me, nobody’s going to be thinking it’s good luck when your whole house is crawling with praying mantises. Clip those branches off your tree and kindly escort them outside.

So you bought an all-natural spruce or Scotch pine Christmas tree, but shortly after you put it up, it starts to look like a frocked tree with a dusting of fake snow. Unfortunately, that’s not the case. Adelgids are Asian insect imports that showed up in the United States around the 1920’s. They’re most known for their rampant damage to hemlock trees, but are an issue for closely related pine trees like the spruce firs.

Thankfully, the encroachment of pine needle scale into Florida has been curbed due to agricultural inspections. Similar to the Adelgids, the signs of pine needle scale infestation are flecks of white on the pine needles. The critters are widespread across tree farms in the Midwest, causing some trees and whole timberlands to appear grey or die off. That’s why the Florida Department of Agriculture and Consumer Services works so hard inspecting incoming Christmas trees to keep our native plants safe.

Pine Bark Beetles are another insect variety that is generally good to have around. They serve a purpose in our ecological system, weeding out the weakest trees so healthy trees can flourish. They don’t usually infest or attack healthy trees. Occasionally, there are instances where an outbreak of Bark Beetles can start attacking even the healthy trees, but that usually happens in the northern Florida area. If you spot the hard bodied red or brown bugs about the size of a grain of rice, or small holes and sawdust on your tree, it’s likely that it was already struggling before it was cut down.

If you’ve ever noticed a bunch of brown cocoons or caterpillar looking larvae crawling around the needles of our Florida slash pines, you’ve seen the early stages of sawflies. When they hatch, the flies are black and yellow. But the flies are not the problem. The larvae devour pine needles – and a large enough group will defoliate an entire tree – then move on to the next and the next. Thankfully, they’re not harmful to humans but they do take a toll on the environment.

While most bugs you’ll discover in a Christmas tree won’t last long and generally aren’t dangerous to you or your family, experts estimate that there could be up to 25,000 bugs in just one Christmas tree. Twenty-five thousand! That’s quite an invasion force for your holiday festivities.

Luckily, there are some preventative measures you can take. Shaking the tree out as we already mentioned. Spray the tree with a garden hose, and keep it in the garage for a day or two before bringing it fully into your home. Another preventative is to dust the tree with diatomaceous earth or spray it with neem oil – just be careful, as ingesting either can make you sick. Once inside, carefully vacuum around the tree frequently – at least until the presents get brought out.

For most of us, the bugs we may bring into the house on our Christmas trees are less of a concern than many of the other invading species around Florida, from roaches to termites. To handle all of your insect issues – or prevent them in the first place – we offer our VIP Term Assure 365. It covers year round, safe-for-the-family treatments for the most frequent pests we encounter – and comes with a $1-million damage warranty against a termite infestation. For all the details or to schedule your first visit, just give us a call!