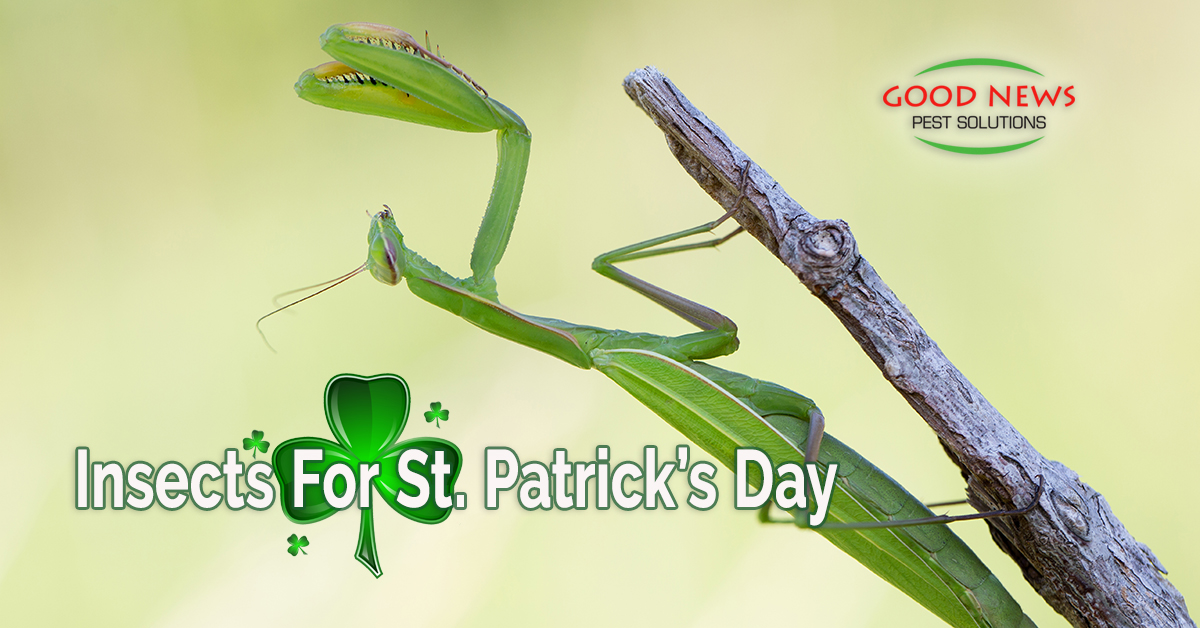 Beware the Ides of March! Wait, sorry, wrong story. But the legend of St. Patrick reads like something Shakespeare might have come up with. The tale goes that Patrick for some reason chased all of the snakes out of Ireland.

Was he attacked by the snakes after fasting? Did he deliver a sermon so full of hellfire and brimstone that they slunk away? Or, as is most likely the case, they were never there to begin with?

The fun part about ancient stories and legends is that they change and evolve – like how the fish Dean catches on our periodic Good News Pest Solutions fishing trips keep getting bigger with every telling.

So, there was a man history remembers as Patrick who spent 16 years in Ireland as a slave. He eventually was freed and returned to Britain and followed in his father’s footsteps at seminary. He returned to Ireland as a missionary to help the people he now loved learn about Jesus. But according to Papal records, there was already a Christian minister there. Most scholars believe that the tales of St. Patrick are a combination of the former slave Patricius (who’s birth name might have been Maewyn Succat) and Bishop Palladius.

And as for the snakes? There’s no archeological record of snakes ever living on Ireland. In truth, the story probably started out as an allegory – St. Patrick brought Jesus to Eire chasing away the ‘serpent’ – aka, the tempter from Genesis 3.

To complicate things further, he didn’t even wear green! Knights in the Order of St. Patrick actually wore a color known as St. Patrick’s blue. Adornments of green probably come from supporters of Irish independence in the 1700’s when St. Patrick’s Day came to America. (And don’t even ask about the corned beef!)

We can relate to Patrick – we don’t deal with a lot of snakes either! But we can and do assist with all sorts of other pests on the Gulf Coast of Florida.

So, in honor of the tradition of St. Patrick’s Day, let’s talk about some emerald-hued bugs.

Mantises are usually thought of in one of two ways – as a fun pet and as a sadistic femme fatal. It may sound odd but mantises are, hands down, the most popular insect to be kept as a pet. The ancient Chinese believed the elongated bugs were symbols of courage and fearlessness. African cultures also revere them for their praying stance.

Despite pop culture depictions, only about 25% of all female mantises bite the heads off their boyfriends after mating. Scientists are divided on whether the, er, cannibalism makes the experience better, or if it’s just that more of the less aggressive males have survived.

Mantises do serve a positive purpose, though. They often provide natural pest control and some farmers even release mantises into their fields, hoping for more control over the various harmful insects.

If you’re spotting larger than usual houseflies with bright green iridescence, you might have a bigger problem than a bug infestation. Unlike houseflies, the common green bottle fly almost exclusively feeds on dead flesh. They both devour and lay their eggs in corpses, which makes them invaluable for forensic use. They’re also good pollinators for a specific range of flowering plants, but doesn’t mean you want to invite them home.

Nezara viridula is an overly fancy name for the southern green stink bug. Originally from Ethiopia, these dull green bugs with shield shaped backs are now all over Florida and our close neighbor states.

While these insects aren’t as bad as their marmorated cousins, they still are a threat to soybean and other legume crops. Not only do they feed on the plants, limiting the harvest, but they can damage the appearance of some crops, making them unsellable.

Aphids are another crop killing bug to be on the lookout for. These insects suck the sap out of a variety of agricultural plants, as well as being a vector for spreading plant viruses and disfiguring ornamental plants. And they tend to be very difficult to eliminate. Luckily, they do have a natural predator...

Green lacewings look a little scary at first but they are wonderful natural pest controllers – especially for the crop destroying aphids. Chrysopidae look like short caterpillars equipped with bright green iridescent wings that shimmer in the sun. They won’t hurt you, but can emit a noxious smell as a defense mechanism when you pick them up.

No matter whether the insects you encounter are green, blue or brown and black, we can help! Good News Pest Solutions provides the greenest, safest pest control solutions you can find – all at an affordable price. For more details or to schedule your first appointment for our popular Go Green Perimeter Plus solution, just give us a call!