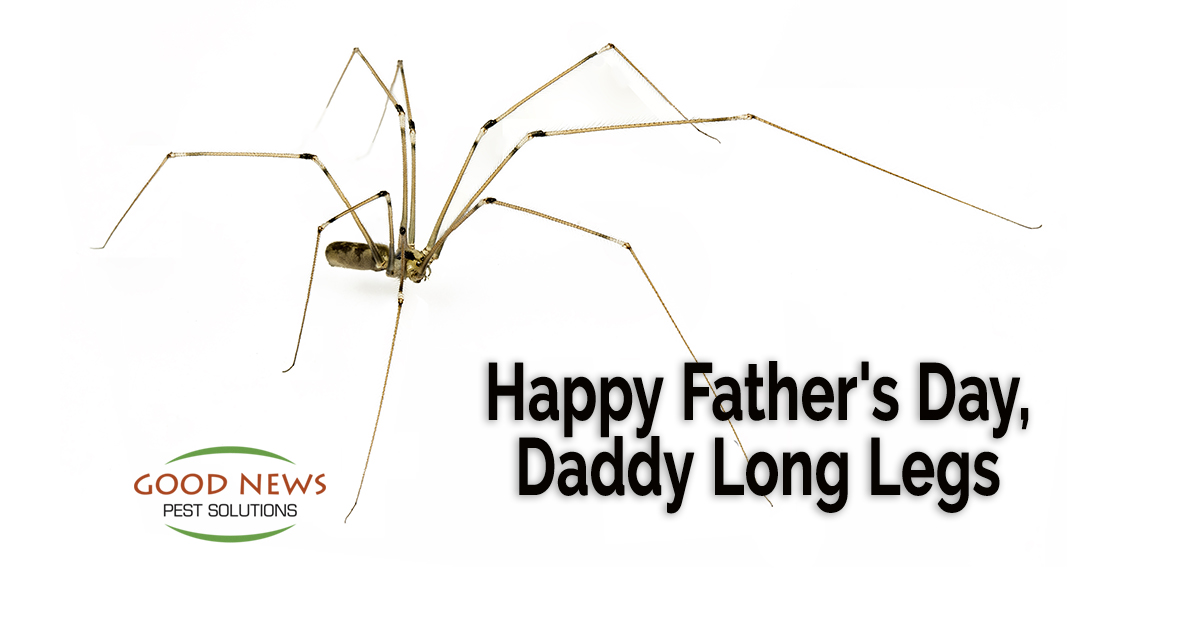 In the United States, and many other parts of the world, this Sunday, the third Sunday in June, we’ll take some time to celebrate Father’s Day. We honor the fathers, grandfathers and father figures in our lives with cards, thanks, and gifts – often ties – and have since 1920.

Of course, the insect world has some famous fathers too. The first ones that come to mind are, of course, Daddy Long Legs. But did you know there are two kinds of bugs that carry that name?

The first, OG Daddy Long Legs are also known as Harvestmen. They live for about a year, going through 8 stages of development. They tend to congregate in groups, and are omnivores. They’ll eat just about anything, including insects, aphids, fungus, worms, snails, spiders and even – gross! – bird droppings.

They are opiliones, which is basically a fancy Latin word for “shepherds.” Their small, non-segmented bodies are pale yellow to grayish-brown in color. They measure about 4 ¼ inches, most of that in the very long, thin spindly legs that give them their name. They don’t lurk in spiderwebs (unless they’ve been trapped there) because they don’t have spinnerets to create spider silk.

These Daddy Long Legs are not actually spiders. They also only have two eyes, hang out in rotted logs and are closely related to scorpions, not arachnids. But unlike their cousins, they don’t bite or sting, at least not humans. In fact, true daddy long legs are great to have around the home. They hate clutter, and will clean not only themselves, but your corners and crevices, while they seek out other bugs to eat.

Our second insect IS a spider. Pholcidae, especially Pholcus phalangioides, as we have pictured above are also known as cellar spiders, carpenter spiders and skull spiders. They have tiny fangs below their mouths that come together in a pinching action.

They can use their “fangs” to pick things up, but don’t generally bite humans. Even when they do, it only inflicts minor irritation, not deadly poison, as some urban myths insist.

As spiders, their bodies are segmented, about the size and shape of a large peanut, with six to eight eyes. They are grey to brown and sometimes have a faint “Star Trek” badge style chevron pattern on their backs.

They do spin webs, albeit a little more haphazardly than the artistic looking webs of other spiders. The Pholcidae use the webs to trap and wrap insect burritos that happen by. They also use the unique tonal resonance of the web-silk to sneak up on unsuspecting dinner.

While both versions of Daddy Long Legs seem a little creepy, they’re actually both great at eliminating other insect pests around your home and yard, like flies and mosquitoes. If you can tolerate them, you should.

For all your other pest control needs, we’re here to help. Our Go Green Perimeter Plus solution is the best you can find – effective, affordable, and safe for your family. No harsh, harmful chemicals that can be as dangerous for us as it is for the insects. For more details, or to schedule your first green treatment, just give us a call!

Oh, and by the way, Happy Father’s Day!