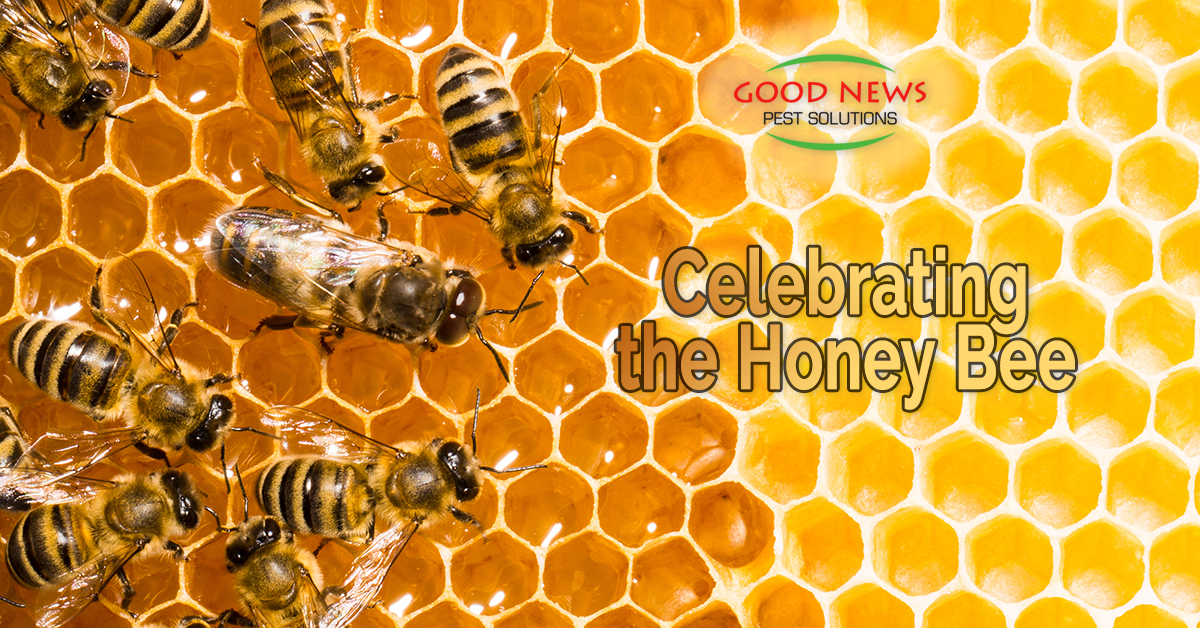 There are a lot of insects we don’t particularly like. Cockroaches, mosquitoes and ants immediately spring to mind. But as we’ve pointed out before, just about every bug has a purpose on the earth and a place in our ecosystem.

Actually, when it comes right down to it, there’s one insect we literally could not live without – despite continuing to endanger it – the honey bee.

With World Honey Bee Day coming this Saturday, there’s no better time to talk about the Honey Bee.

Scientists have catalogued around 20-thousand different species of bees in the world – 4000 of them show up in North America. While we have cultivated and assisted several thousands of bees, most of the bee population is wild – as it should bee, er be.

When we think about bees, most of us immediately connect them to honey and honeycombs. And it’s true, many bees produce honey, and honey is valuable not just as a sweetener, but for many medicinal uses as well.

Honey is known to have antioxidant, antimicrobial, anti-inflammatory, and even anti-cancer properties. Additionally, it has been used to treat everything from asthma, constipation and fatigue to hemorrhoids, hiccups, hepatitis and tuberculosis. Of course, not all of these are medically recommended.

Beeswax is used for waterproofing and fuel. Some skincare regimens and medical ointments also use beeswax. Bee venom, bee resin (propolis) and bee pollen can be found in many medical treatments – and a recent study found honey bee venom is effective against certain types of cancer cells.

Much more important than the production of honey and its use as a sweetener and homeopathic remedy is the place of the honey bee as pollinator. While there are several insects that contribute to pollinating plants – including the mosquito – bees are responsible for one-sixth of the flowering plant species worldwide.

Without the bee flitting from flowering bush to flowering tree to flowering flowers, the life and reproduction of plants would be drastically different. And so would our lives as well. That fraction of the plants they pollinate becomes much larger when we put it under a microscope.

Bees are responsible for pollinating 70 of the 100 most significant crop species in the world. They “manage” food production equivalent to some $30 billion a year. And that’s not even counting the impact on livestock and other food sources that would also be affected by the lack of flowering foods. Those are giant numbers so let’s simplify. Approximately one out of every three spoon or forkfuls of food you put in your mouth is there because of bees!

If that wasn’t reason enough, honey bees also have historical significance. Australian Aboriginal tribes use beeswax for their rock and cave art and for forming figurines of horses and cattle for their children. The ancient Greeks saw bees as symbols of immortality. Just 100 years ago, superstitious beekeepers in New England would whisper significant events to bees so the news would be spread and preserved.

Plus, because we’ve been utilizing honey bees for centuries (at least 3000 years before Jesus was born), archaeologists can use evidence of bees and the chemical fingerprint of beeswax to establish historic timelines and track cultural trends from olden times. Tell that to the mosquito who ‘sucked’ the dinosaur’s blood.

Sociologists and psychologists today are also studying bees and their social hive behavior in hopes of figuring out better large scale evacuation techniques. And researchers often use the honey bee as a ‘canary in a coal mine,’ noting where environmental changes are happening, since bees often react to the differences before we can perceive them.

Fight of the Bumblebees

60+ years ago, MIT meteorologist Edward Lorenz discovered what he called “sensitive dependence on initial conditions.” AKA, the butterfly effect this states that the smallest change can wreak havoc or hope in a larger system. “

While, “a butterfly flapping its wings in Brazil could produce a tornado in Texas,” is likely more hyperbole, the loss of the bee population is nothing to sneeze at. Between pesticides, increased urbanization and other environmental factors we’re still guessing at, bees are slowly declining.

Thankfully, holidays like World Honey Bee Day are raising awareness of the danger of turning a blind eye to bee issues. They are our issues too. So enjoy some honeyed foods on Saturday and consider at least planting nectar plants in your yards and gardens. If you’re ready to really invest some time and money, beekeeping, while not easy, can be practiced in urban areas as well as the country. And if you’re patient, in a couple years you could be celebrating World Honey Bee Day with your own honey!

Good News Pest Solutions is here for all your pest control needs. From our basic Go Green Perimeter Plus coverage to our all-in Term Assure 365, we can handle any bug or rodent issues you’re having. Just give us a call!