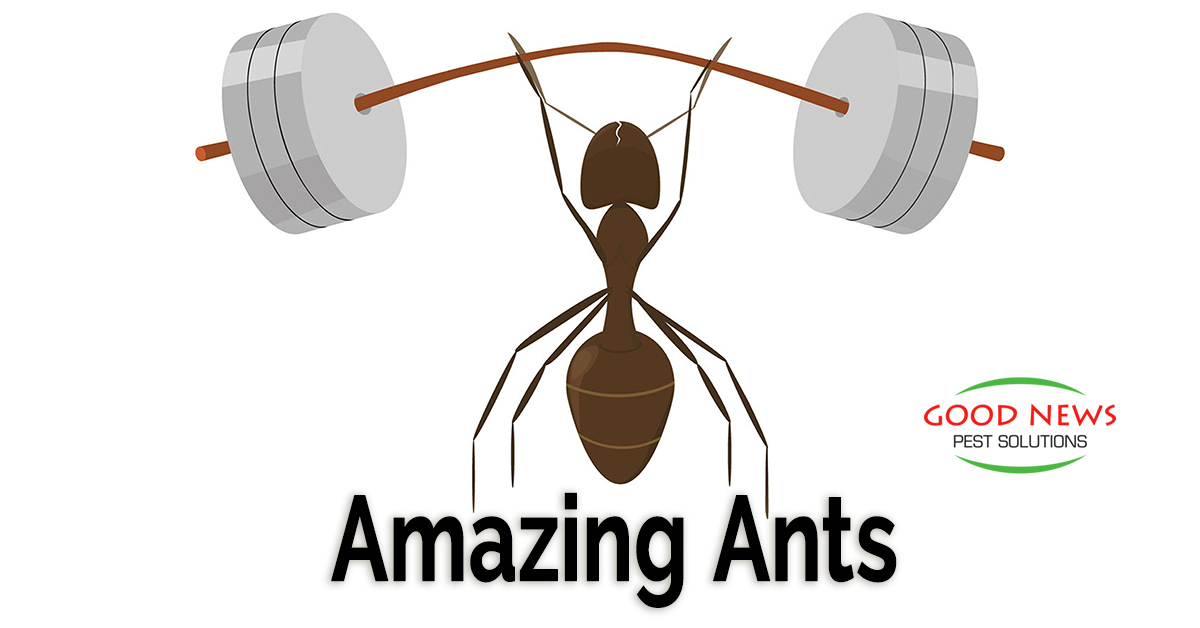 With the cyclical shift of falling back as Daylight Savings Time ends, we mark the start of one of our most active periods here in Florida – “snowbird” season.

The snowbirds come for the same reason the rest of us stay – because of our wonderful sub-tropical weather. They just can’t stomach the humidity in the summer time, even though our temps stay right around 80 year round.

That weather also means we don’t get the same seasonal insect problems like our neighbors to the North. We have termite swarming season, lovebug seasons, and mosquito season.

But ants? They’re here – and often trying to invade our homes – all year long.

Despite how annoying it can be to encounter ants – or painful, if they’re biting fire ants – formicidae are some of the most incredible creatures God placed on the earth. Here are some of the amazing things you may not know about ants.

There Are a Lot of Them

This may not seem like a surprise but consider this. Scientists estimate there are 10,000,000,000,000,000 ants in the world. That’s TEN QUADRILLION or about a million ants for every human being on the planet. Though they’re small, if you put all the ants together and weighed them, it would be almost the exact same weight as all of the humans put together!

The biggest living ant species measures an inch and a half. But an older, extinct species grew to nearly three inches across. It also had wings. Ugh!

And, by the way, researchers at Harvard and our own Florida State University found that ants have probably been on the planet since the dinosaurs!

They’re Not The Nicest

We already mentioned the pain of being bitten by fire ants – which you never forget once it’s happened. The Federal Food and Drug Administration estimates that an excess of 5 billion dollars is spent annually on control, damage, and medical treatments due to red imported fire ants. That’s not even counting $750 million in crop and livestock damage.

Ants can also heft 20 to 50 and in some cases 100 times their own body weight. Imagine bench pressing an SUV – that’s how strong they are!

They’re the original slave drivers. And not like slavery in the Bible, where often someone is working off their debt. More like the ancient Romans practiced slavery – ants will conquer another ant hill or nest and drag captives away to work for them. Or like the Vikings were rumored to do – ants will sometimes invade a neighboring nest and steal the larvae and pupae of another colony and then raise them to be slave workers.

Their Bodies Are Quite Different

We’re not talking about the obvious differences. Those are, well, obvious. But did you know ants have two stomachs? One is for eating and digestion, same as ours. But the other is for storing food to be shared with other ants. That way the ants caring for the queen and her brood can be fed as well.

Ants also don’t have lungs, but have an amazing capacity for oxygen. Ants bring air in through a series of tiny holes in their bodies called spiracles. These spiracles are connected via tiny tubes throughout the ants’ bodies. Instead of using a circulatory system like ours, the oxygen brought in spreads directly through the tubes to all parts of the ants’ bodies.

The other thing about the spiracles is that they allow ants to survive underwater for up to 24 hours. They are strong swimmers and even when thought dead, can revive if there is enough oxygen coming in through their spiracles.

Ants don’t have ears either. They can still “hear” though. Like Beethoven or Marvel’s Daredevil, they can sense vibrations. Unlike those talented humans, ants have their “hearing” organs in their knees. They use vibrations to communicate about danger and where to find food – including in your home!

Of course, if you’re a seasonal snowbird, you might just now be opening up your house and discovering ants – especially since Hurricane Ian drove many of them out of their normal areas. We’re here to help. Our Go Green Perimeter Plus solution covers all the usual creepy crawlies – roaches, silverfish, spiders and, yes, ants.

We’re happy to send one of our highly trained, expert technicians to treat your home effectively and safely for the whole family. And it won’t cost you an arm and a leg! For more details, just give us a call!

Tags: ants
« Back to Blog