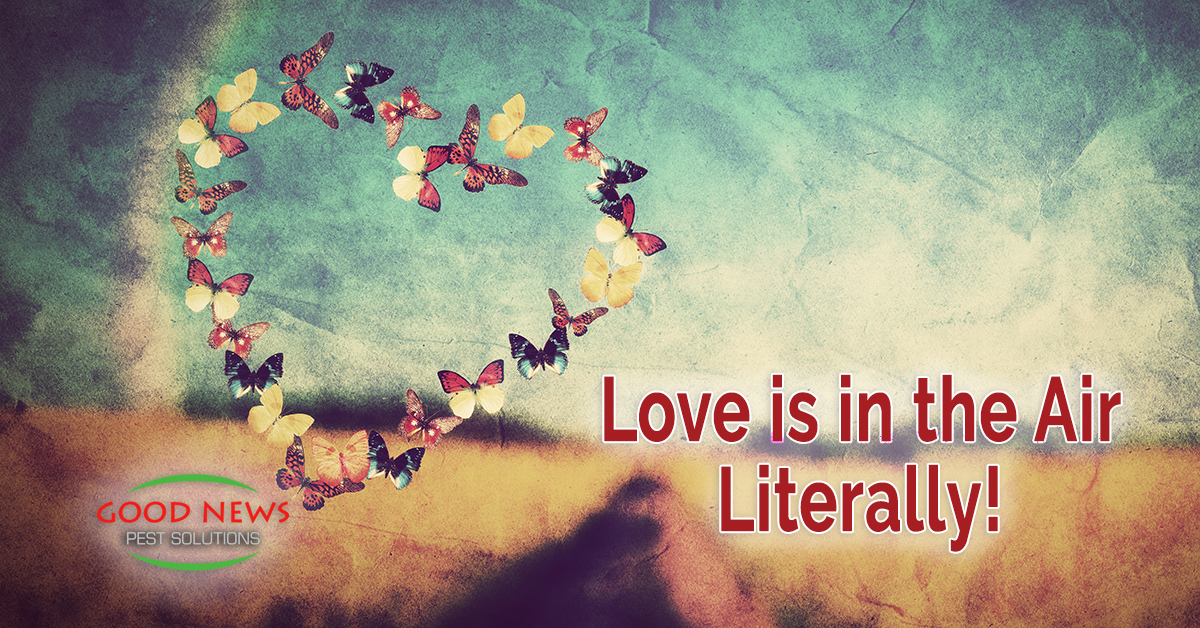 Love is in the Air - Literally!

Well, it’s almost that time of year – when our Gulf Coast of Florida is besieged by overly-amorous insects. But the aptly-named love bugs won’t take to our highways until at least April. In honor of the upcoming holiday, instead of talking about annoying or disgusting bugs, we’re going to talk about the sweeter side of insect life.

We all know that bees are essential to life. Scientists noted decades ago that, while we have other plant pollinators, if the bees were to completely disappear, we’d lose somewhere between a third and a half of our crop variety. We’d have plain grains and corn. And all foods would become much more expensive - especially with all those folks out on the West Coast going vegan!

But Bees have an even longer history of being associated with feelings of love and affection. While ants are industrious, and hornets are angry, bees are typically associated with spreading goodness and positivity. After all, they go from flower to flower; pollination is literally helping plants reproduce; and they make some pretty sweet stuff!

The Promised Land in both Hebrew and Christian scriptures is described as a place overflowing with milk and honey. And both Greek and Eastern mythologies historically attribute bees with love, fertility and provision.

Butterflies in Your Stomach

Well, this isn’t quite as romantic as we hoped when we first started looking into the sensation we’ve all felt, usually first in adolescence, when we see that person that we’re madly… in “love” with?

But it’s not a bad thing. Scientists say that fluttering in your stomach is a sign that your brain has activated chemicals to spur you on to love – not commit one of the seven deadly sins. The emotional part of your brain is also connected to motivation – so it activates the vagus nerve – motivating you to want to see the person who makes you feel this way again.

It also triggers chemicals in your brain related to pleasure and comfort – and those stick with you, long after the feelings of puppy love are gone. That’s why you might get those butterfly feelings in your gut, seeing your spouse after they’ve been away for work or school, but not when you see them every day. And as much as we might desire that fluttering reminder of our affection, too much of that stimulation can cause you to get light headed and pass out.

Seeing butterflies in the air has also long been considered a sign of luck, as well as renewal and resurrection!

Speaking of resurrection – many cultures throughout history believed that dragonflies were messengers from the realm of the dead. In some cases, they carry the spirit of a recently deceased loved one to check on their families back home. In others, they are sent as a guardian angel, or reminder to the living that they are nearby, just in another realm, where we will all be reunited one day.

In many Asian countries, dragonflies are associated with finding rest and peace. They’re also sometimes viewed as carrying our hopes and dreams. Or they can be a symbol in plain sight of our hidden desires and passions, including sometimes our unspoken love for another person.

And even if you don’t associate with the spiritual connections, spotting a dragonfly is always a good sign – cause they eat mosquitoes, as many as 100 apiece in a single day!

As effective as dragonflies are, we can’t always rely on them to entirely control the mosquito population, especially during the rainy season – which isn’t as far off as we’d like. That’s why Good News Pest Solutions offers our exclusive No Bite Zones Mosquito Protection Program. This 100% DEET free solution is safe for your family and for the mosquitoes – transforming them and their offspring into vegans. No more bites, just good times in the backyard. To learn more or add a MosquitoPaq to your next visit, just give us a call!