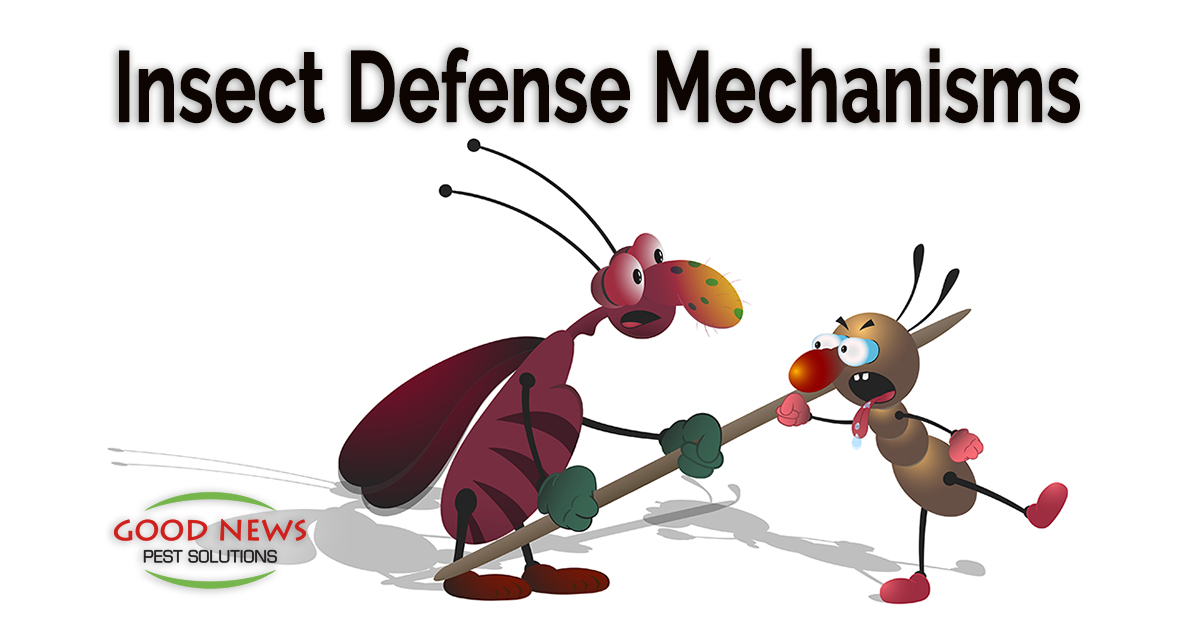 Being pretty much at the top of the food chain – you know, unless they figure out that whole Jurassic Park thing – sometimes we may forget that other creatures in our world have a lot more to worry about than work and picking up the larvae after school.

And there are few things in our world that have more natural predators than the members of the insect world. Birds, fish, amphibians, weather, humans and even other bugs are constantly interrupting, if not outright attacking, on a daily basis.

As annoying and disgusting as some of these insects are – we’re looking at you, cockroaches and house flies – we know that every living thing has a purpose and place in the ecosystem. So of course, many insects were blessed with defensive mechanisms by their creator or developed them over time.

Let’s look at some of the more interesting selections.

Colors of the Wind

The simplest defensive tactics many insects employ involve their coloration.

Some insects bear bright, warning colors. Just like we instinctually know that red likely means danger, birds, mammals and amphibians also have that same inclination. So, while a Monarch butterfly may look pretty, a bird is less likely to fly down and gobble it up because it remembers how bad it tastes and associates that with its bright colors.

Other similarly brightly colored bugs secrete toxic chemicals or have barbed exoskeletons painful to the touch. We’ll go into that more in a moment. But some tastier insects take on the aposematic colors of these bad tasting or painful-to-encounter insects so predators will leave them alone.

In a similar fashion, some bugs will employ camouflage to conceal themselves in plain sight.

Mimesis is when insects appear to be items in nature. Walk over to a bush and you might discover a few of those twigs are actually walking sticks or thin caterpillars. A dead leaf could actually be a katydid, a butterfly or a moth hiding out. Some even look like the predator of their predators when folded up on the ground or a tree branch.

Then there’s mimicry. We talked about it earlier with the Monarch butterflies. But some insects may hide by pretending to be honey bees, wasps, or another painful-to-eat or uninteresting bug.

Many insects are blessed with spines, bristles, sharp hairs or armored shells that protect them from would-be attackers. We highlighted one dangerous caterpillar a couple weeks ago. Of course, we know bees and wasps have stingers. Wasps in particular will swarm an attacker, stabbing them multiple times. Bees only defend when threatened – and each sting for them is a suicide mission.

Some caterpillars even have specialized hairs that not only poke you, but start pumping toxins through the hollow urticating strands right into your skin.

If you’ve ever tried to crush a particularly well-armored bug, you’re familiar with this next one – exoskeletons of steel. Okay, not steel, but at that size the comparison works. The Ironclad beetle might as well be in Tony Stark’s armor for all the damage it takes from shoes or swatters. And insect collectors avoid certain weevils because the mounting pins can’t penetrate their skin.

As we mentioned in the first section, another popular insect defensive mechanism is chemical secretions. Some of these are painful or taste nasty or just trigger an autonomic response – like when you feel a spider on your hand and try to throw it off without thinking first.

One of the all-time coolest defense mechanism has to be the bombardier beetle. It’s born with two specialized glands in its torso. When it feels threatened, chemicals from one fire into the other and the result is a spurt of boiling hot steam and quinone – a kind of biological napalm – at least for the creature attacking the bombardier beetle.

Some insects eject substances from their bodies which while they don’t sting, smell horrendous.

Even if it’s not a chemical reaction, many of the secretions can cause pain, taste horrible, or cause an allergic reaction – or a combination thereof! Regardless, it’s enough to convince would be predators and casual, curious fondlers to steer clear.

Thankfully, over the years we’ve developed other options to defend our homes and yards against insects besides harsh, dangerous chemicals. Good News Pest Solutions uses the greenest, safest and most effective treatments for everything from mosquitoes to termites.

Our most popular solution covers all the usual insect suspects we find here on the Gulf Coast of Florida – and it’s affordable. Go Green Perimeter Plus is applied three times a year, guaranteeing pest-free living. It can easily be packaged with our No Bite Zones Mosquito Protection Program, Term Assure 365 or our specialized T.A.P. insulation. For more details on any of these programs, just give us a call!