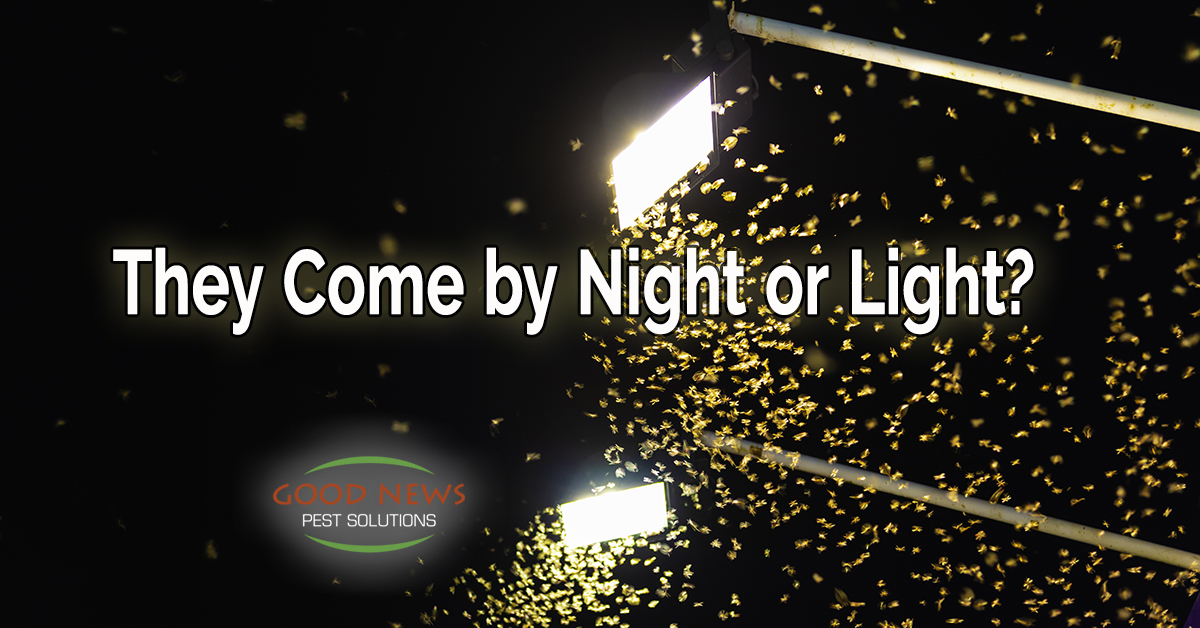 They Come by Night or Light?

It sounds like a 1950’s mutant monster movie – “The Insect Apocalypse.”

For the past few years that phrasing has become synonymous with scientists’ observation that there appear to be fewer insects – or maybe we need to look harder. Recently, some researchers have posited the theory that years of bugs being battered, beaten, collected and killed has sparked an evolutionary shift.

Lonely is the Night

About half of the species of insects on Earth are nocturnal.

As long as we’ve lived in structures humans have been aware that some insects only come out at night. Whether it’s cockroaches scattering as we come into a room or bed bugs hiding between the sheets – some insects are largely nocturnal and tend to keep to themselves.

Then there are the insects that come out at night but are attracted to the light. Moths, mosquitoes, june bugs, earwigs and weevils have the “most ruinous propensity (to) rush impetuously into bright flames.”(Darwin Correspondence Project)

But researchers have noticed, both anecdotally and experimentally, that they’re seeing fewer bugs attracted to light sources in recent years. That led to the theory that we’re approaching an insect apocalypse where diminishing numbers of insects will impact the ecosystems of our world.

For example, a significant loss of bees – while not part of the light studies – will devastate our agriculture and farmlands in very quickly plunging the world into a deep famine from which we may not recover.

But there could be another explanation that doesn’t ring the death knell for our planet.

Bright is the Night

While the light bulb was developed by Thomas Alva Edison in the 1870s and 80s, the general public did not see widespread use of electric lights in their homes until after World War I. So really, we’ve only had artificial lighting for about 100 years.

Since that time we’ve seen the bugs attracted to the light become more prevalent as they followed their God-given genetic inclinations to move towards the light, even if it means their doom. That was fine in the early 1920’s and for decades after. Scientists even developed light traps to catch and study those insects.

But an international academic study, helmed by the Colorado State University Department of Biology and published in 2019, found an interesting trend. Based on their studies conducted in US, Canada, Australia and New Zealand, the researchers came to the conclusion that extended light pollution was adversely affecting nocturnal insects.

Excess light makes it difficult for fireflies to find mates since they use their bioluminescent to do so. For the bugs attracted to lights, like moths, the scientists estimated about one third of them are dead by morning – tired or eaten by birds and other predators. Mayflies can be tricked into laying their eggs on reflective asphalt rather than in a body of water. And, of course, millions of bugs die on the freeways every day – not just love bugs.

Tender is the Night

But what if, as one of the graduate students who conducted that 2019 study, Avalon Owens, proposed, it’s not that there are fewer insects, but that they’ve learned – on a genetic level – to avoid the light?

Owens suggested that their data could be interpreted differently – illuminating Darwin’s theories. Perhaps, she reasoned, the insects have a new understanding of their survival and now hide deeper, darker, and smaller than their former counterparts who were killed.

She further points out that there may have been unconscious bias on the part of researchers. If you’ve been using the same method – light traps of some form - to attract bugs for three centuries, and the insects have always showed up, it’s natural to assume when they don’t show up, it’s because they’re not around.

The problem is neither theory is without its questions and unproven assumptions. But that’s science. With the millions of insects across the globe, it is difficult in many instances to determine exact populations – now or in the past. We could be seeing a decline or we may be fine regardless of the evolutionary ideas.

Owens plans to look deeper into other studies trying to get a better grasp on the actual numbers. And other scientists have proposed adjustments to the studies, listening instead of just looking for insects.

Tonight is the Night

The other factor the scientists pointed out that bears more study is that insects aren’t the only ones impacted by excess light pollution. And they don’t mean just not being able to see all the stars. Light pollution affects animals and humans, disrupting migratory patterns, sleep schedules and even things like Vitamin D absorption.

Like so many things on our planet, God created the perfect environment to sustain life – and what hurts insects can hurt us as well. We were given the command to steward the planet and we need to take that seriously.

That’s why Good News Pest Solutions works to use the most sustainable solutions for insects and other pests. We use no harsh chemicals that can hurt us, even as the bugs develop resistances. We’re committed to serving our customers with the best solutions while keeping our planet and our clients’ families safe. To learn more about our mission and solutions, just give us a call!