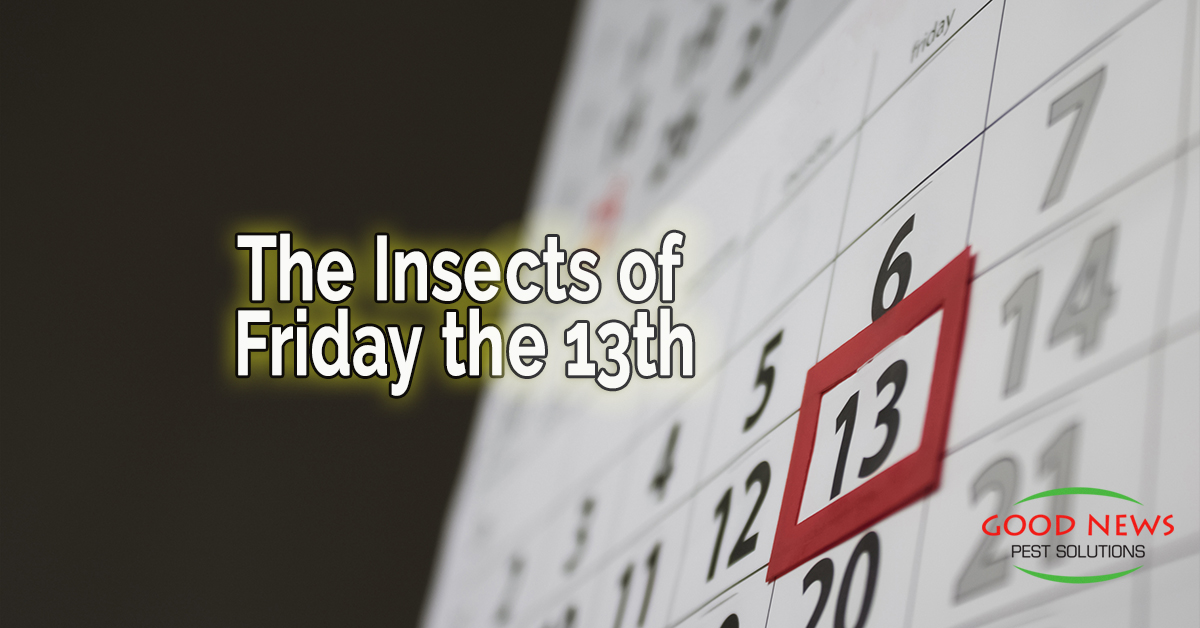 The Insects of Friday the 13th

We live in a very strange world. Tomorrow, the second Friday of January, sometimes referred to as “Quitting Day” is also Friday, the 13th. Which we all know is unlucky. Or do we?

Like many of the superstitions humans have, there are two sides to every story. If, as Indiana Jones once pointed out, “…you believe in that sort of thing.”

Long before the Holy Roman Empire spread Christianity to its four corners, Germanic and Norse people worshipped a different set of gods, including two ladies: Frigga and Freya. Depending on which historian you talk to, either both ruled separate areas (love, marriage and predicting who was going to die in battle), or they were the same person just translated poorly.

In the Marvel movies, she’s Thor’s mom. And as we mentioned last week, Thursday was once “Thor’s Day” and similarly, this female entity lent her name to Friday.

The number 13 was once considered pretty lucky too. Taylor Swift, for one, still thinks it is. But whether you attribute it to the last supper and Judas being the unlucky 13th guest, or Loki crashing an Asgardian party (also as the 13th guest), over time, it became considered unlucky.

Add to that old Jewish mythology that says Adam and Eve ate the forbidden fruit on a Friday, Cain killed Able on a Friday, and of course, Jesus was crucified on Good Friday. Plus the Knights Templar were supposedly slaughtered on Friday the 13th, 1307, if Dan Brown can be trusted.

Needless to say, the stage was set for Friday the 13th to turn from good luck to bad, even before Chaucer proclaimed Friday “a day of misfortune” in his Canterbury Tales, or a certain lakeside killer took his place on movie screens in the 80’s.

Where do the Bugs Come in?

Much like the eponymous day, many insects are considered lucky – or not so much, depending on who you talk to and when. See if any of these sound familiar:

Clearly superstitions about insects are as numerous and varied as the people under the sun. Everyone, it seems, has their own interpretation. So why not embrace the good and wonderful and disregard the ominous and dangerous?

So get married on Friday the 13th. It’s as good as any other day and ideal for the Vikings. Watch for a butterfly to land on your head – hopefully not in the middle of the wedding!

Fish where the dragonflies hover. Let spiders roam the corners of your house – especially the Christmas spiders with their sparkly webs. And that’s not even mentioning how they take care of truly bad bugs in your home.

And for the bugs they don’t eliminate, may we suggest our Go Green Perimeter Plus solution? It’s the most effective affordable, green, and safe-for-the-whole-family solution. Start the year off right – not subject to fear, but embracing hope – and a pest free home. For all the details, pick up the phone and give us a call!