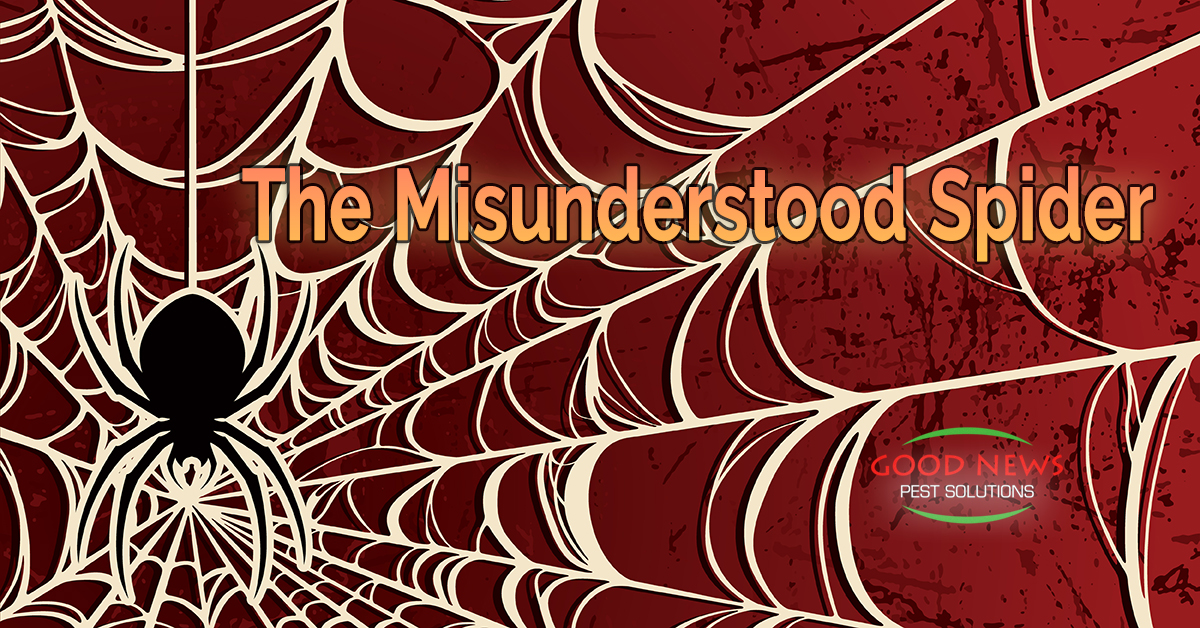 We’re just a few days past the middle of October. While it hasn’t always been true, the month seems dominated now with the trappings of Halloween. Haunted houses (or mazes for Universal Studios fans), black cats, ghouls, goblins, ghosts and…spiders.

Sometime around 1000 years ago someone, probably an overprotective clergyman, decided that along with rats and cats, spiders should also be associated with witchcraft and evil doings. Rats were already (and still are sometimes) blamed for bringing God’s judgment of the Black Plague. Cats have always been mysterious and off-putting.

But spiders? Sure, a lot of them are black, hang out in dark, often deserted areas – like abandoned houses, graveyards and caves – and have a history of being viewed as mystical. But in ancient times they were as often a sign of good luck than bad.

But, of course, the ‘evil intentions’ of spiders are just one of the many myths and misconceptions about the eight legged arachnid. For starters, no, they’re not insects.

Here are a few other ways the spider is unfairly scorned in our world.

While many species do indeed move to warmer climes as the temperatures start to drop, spiders do not number among them. Especially on the Gulf Coast of Florida. Any spiders you spot in your house aren’t there because of the weather. They simply live there too. House spiders are more common than you might like to think, but it’s true.

What’s more, having spiders around is a good thing. They’re natural pest controllers. Rather than shooing them out the door or knocking down their webs, we should be welcoming them into our humble abodes. Yes, they can be creepy – but often for one of these other wrong reasons.

Another popular myth, even before the Internet went viral, is that human beings swallow an average of 8 spiders a year. It’s just not true. For starters, spiders don’t often spend time in beds because there’s nothing for them to eat. They prefer non-human infested areas. Spiders mostly avoid humans – and would definitely leave sleeping humans alone. Spiders are sensitive to sound and we make a lot of loud, annoying noises, both awake and asleep.

As noted above spiders tend to avoid humans if they can. Think of it from their perspective. We’re big, clumsy, always swatting down their carefully crafted webs or stomping at them like we’re the giant from the top of the beanstalk. And they’re seeing us in 3D spider vision reflected in eight shiny eyes.

The only times spiders may act aggressively is if they or their egg sack is threatened. Some act and look angry and about to attack – which is their attack. Their reaction is a defense mechanism meant to scare away predators but won’t go any further.

In reality, spiders have no interest in biting you. They don’t eat human flesh or drink blood. On top of that, even if you are attacked and bitten by a spider, of the estimated 43,000 species of spiders in the world, only a handful are dangerous for humans - and maybe only 30 have caused a human’s death.

This one’s kind of our catchall for the various minor myths and misunderstandings about spiders. For example, the majority of what people call “Daddy Long Legs” aren’t spiders. Many are insects called harvestmen or crane flies.

Not all spiders spin webs. While all spiders produce spider silk, only about half of the world’s spider population spins webs. The other half hunt or lie in wait for prey at ground level. Some even burrow. And all webs are not the standard orb-shaped spiral out from the center as in our graphic above.

There are sheet webs, funnel webs, and of course, the Halloween favorite – cobwebs. And one last one – spiders don’t come up drains any more than hair or skin cells. They fall into drains, usually because they’re exploring, curious about water sources.

While we understand the creepiness factor leaves most of us wanting nothing to do with spiders, they do have a place and purpose in the world, and it’s often helping us. So remember that as you’re sweeping away the cobwebs or scooting the spider out of the house.

And if they’re really bothering you, we can help. Our most popular solution, Go Green Perimeter Plus protection keeps the spiders – and other creepy crawlies like roaches, ants, and silverfish out. And it’s safe for the whole family. To find out more, just give us a call!

Tags: myths, spiders
« Back to Blog